For years climate scientists have warned about the ferocious wildfires and hurricanes that are now overwhelming many communities. Today alarms are ringing about a related financial danger: risks lurking within government bonds, the biggest part of the global debt market.

A growing number of investors, academics, policymakers, and regulators are questioning whether credit ratings—the ubiquitous scores that underpin much of the financial system—are accounting for the impact that extreme weather events and policy changes related to global warming will have on borrowers. Once those risks materialize, they threaten to trigger the kind of sudden, chaotic asset collapse described by the late economist Hyman Minsky. The effects would sweep through pension funds and the balance sheets of central and commercial banks.

“A lot of this looks like it’s years and decades ahead, but when you look at the financial implications, you run into risks of Minsky-type moments and rapid devaluations,” says Steven Feit, an attorney at the Center for International Environmental Law in Washington who focuses on climate liability and finance. “The climate time scale is decades or a century long. The financial timeline is right now.” 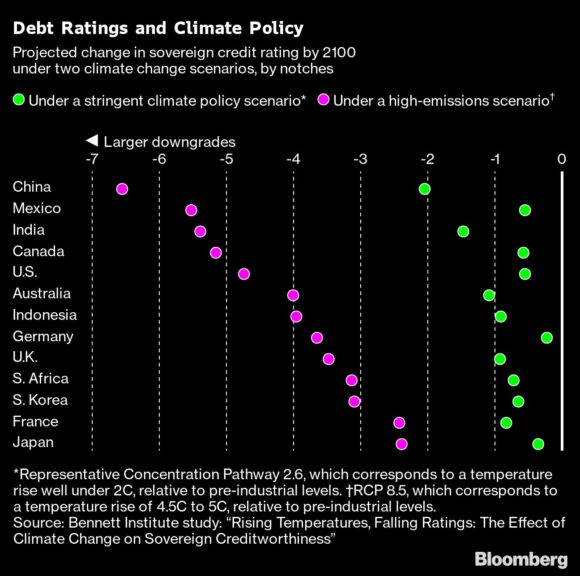 For instance, 10 of the 26 members of the FTSE World Government Bond Index, including Japan, Mexico, South Africa, and Spain, will default on their sovereign debt by 2050 if there’s a “disorderly transition”—that is, if governments’ attempts to reduce carbon emissions are late, abrupt, and economically damaging. That’s according to research by FTSE Russell, an index provider owned by London Stock Exchange Group Plc.

“We have these really well-understood structural challenges coming our way over the time horizon of two, three, four decades, and that is in no way reflected” in credit ratings, says Moritz Kraemer, who oversaw sovereign debt ratings at S&P until 2018. “Some countries issue much longer-dated bonds—50- or 100-year bonds—and they’re all rated the same as a two-year bond. And I think that’s not appropriate.”

Earlier this year, Kraemer—who’s now chief economist for CountryRisk.io—and a team of academics used artificial intelligence to simulate the effect of rising temperatures on sovereign credit ratings in research for the University of Cambridge. They found that 63 out of 108 sovereign debt issuers, including Canada, Germany, Sweden, and the U.S., would experience climate-induced downgrades by 2030 under a scenario in which emissions reductions failed to meet global targets. The research, led by Patrycja Klusak, a lecturer in banking and finance at the University of East Anglia, showed that climate-induced downgrades could cost national treasuries from $137 billion to $205 billion.

Sovereign debt is “the backstop. It’s the thing everybody retreats to in a time of calamity and conflict and turbulence,” says Matthew Agarwala, an environmental economist at the Bennett Institute for Public Policy at Cambridge and one of the authors of the research. Rating companies “were catastrophically wrong on corporate and financial institution risk for the financial crisis,” he says, “and now they’re lining up, defensively, to be just as catastrophically wrong when it comes to climate and sovereign risk.”

Consider Australia, Canada, and Russia, countries with economies tied to fossil fuels and other natural resources. All would face challenges even in the best-case scenario for the planet, where the transition to lower-carbon economies is carried out in an orderly fashion, says Lee Clements, head of sustainable investment solutions at FTSE Russell. Under a high-emissions scenario, Australia’s credit—currently carrying the top rating from each of the Big Three—would likely drop about one notch by 2030 and four notches by 2100, according to the Cambridge research.

“Given the high level of CO2 emissions and lack of decline in these emissions, Australian government bonds will be evaluated more critically, notwithstanding its AAA rating,” says Rikkert Scholten, global fixed-income portfolio manager at Robeco Asset Management. He doesn’t invest in Australian bonds in the firm’s climate bonds strategy, a portfolio aligned with the United Nations’ Paris Agreement on climate change, a 2015 international treaty to reduce harmful emissions.

In Europe, policymakers and regulators are starting to get involved. The European Central Bank said in July that it would assess whether rating companies are providing enough information about how they factor climate-related credit risks into ratings. The central bank, which uses ratings from the Big Three and Morningstar Inc.’s DBRS to help assess assets, could introduce its own requirements on climate if it deems the rating companies aren’t doing enough, says Irene Heemskerk, head of the ECB’s climate change center. The European Securities and Markets Authority, the region’s financial markets regulator, plans to report on how environmental, social, and governance (ESG) factors are incorporated into credit ratings, and the European Commission may take action based on the findings.

Emerging-market government bond investors like Jens Nystedt, a fund manager in New York at Emso Asset Management, are paying specialist ESG data providers to get a better picture of the risks. Robeco uses a ranking tool incorporating ESG data including climate-related factors. Lombard Odier Group has its own “portfolio temperature alignment tool,” one of the main resources it uses to accompany credit ratings when determining assets’ vulnerability to climate risks.

“We still need to do our own work,” says Christopher Kaminker, head of sustainable investment research and strategy at Lombard Odier. “Everyone understood that in the financial crisis—they [the rating companies] don’t always get it right.”

The Big Three have rapidly expanded the ESG side of their businesses. Fitch and Moody’s have developed ESG scores to help show the impact of climate risk on ratings. S&P says the company “includes the impact of ESG credit factors, such as climate transition risks related to carbon dioxide and other greenhouse gas emission costs, if our analysts deem these material to our analysis of creditworthiness and if we have sufficient visibility on how those factors will evolve or manifest.”

David McNeil, director of sustainable finance at Fitch, says that the company’s ESG relevance scores are a core ratings product and that climate considerations are fully integrated into the credit research process.

The strategy at Moody’s is similar. Swami Venkataraman, the company’s senior vice president for ESG, says that its Environmental Issuer Profile Scores—which indicate exposure to environmental risks—factor directly into ratings and that “climate considerations have always been an input.”

Half of the sovereigns that Moody’s examines are rated differently today than they would be in the absence of ESG considerations, Venkataraman says. The recent wildfires in Greece highlight credit risk posed by climate change, the company said in research published in August.

Agarwala, the Cambridge economist, says “credit ratings companies are simply providing the same old rating, plus an ESG garnish made up of ‘scientific’ indicators of varying relevance and credibility.”

“We need them to start factoring climate-economic projections into today’s mainstream rating,” Agarwala continues. “It’s the difference between getting a diagnosis from a doctor beforehand vs. from a coroner at the autopsy.”

But some types of climate-related risks are easier to factor into ratings than others, according to Peter Kernan, global criteria officer at S&P. “It is inherently very difficult to be precise about the physical effects of weather on credit,” he says. Transition risk is more straightforward, Kernan says, because it “relates to public­ policy decisions by global policymakers—for example, regarding carbon taxes.”

The Big Three have taken steps to reflect growing climate risks in some sectors and regions. Fitch adjusted its ratings model for Jamaica because of the increasing probability of natural disasters on the Caribbean island nation. S&P says it’s reduced its ratings on Caribbean countries’ debt because of growing natural disaster risk. Roberto Sifon-Arevalo, S&P’s chief analytical officer for sovereigns, also points out that a country’s susceptibility to physical climate risks alone doesn’t always translate to downgrades. Japan, for instance, experiences frequent natural disasters but is better able to withstand them because it’s a wealthier nation, he says.

The financial risks posed by climate change are felt most acutely by developing economies, especially those that are ­ill-prepared to address climate-related shocks, according to the International Monetary Fund. Downgrading countries that are least prepared for climate change will only make it more expensive for them to raise the capital needed to propel the transition to lower­ carbon economies. That theme is already playing out in green bond markets, where emerging-market companies and countries find it increasingly difficult to attract funding, according to a report from London’s Imperial College Business School.

Kraemer, the former head of sovereign debt ratings at S&P, says the business models at credit rating companies create a conflict of interest. Because they’re paid by the entities they rate, he says, they may be reluctant to downgrade an important client. The companies say commercial considerations don’t influence their ratings.

For some investors, the solution could be in providing ratings that change for different maturities.

“If I have a bond that matures in the next five years, do climate change considerations really affect the repayment probability of the security? Probably not. If I have a 50-year bond, yes it does,” says Nystedt at Emso, the emerging-market bond firm, which oversees about $7 billion. Rating companies “don’t typically divide it up by maturity—I think ultimately that’s the revolution that’s going to happen.”

–With assistance from Greg Ritchie and Jana Randow.