Texas struggled through its driest year in history in 2011. Four years later was its wettest ever.

The Mississippi River rose to all-time-high flood levels in 2011. In 2012, its second-lowest.

After a six-year drought that made agricultural irrigation a political hot potato, Northern California experienced nearly double the normal rainfall this year, beating the old mark set in 1983.

As the planet warms, a less ballyhooed new normal is emerging in weather extremes. With deluge following dust, the record book is becoming increasingly difficult to rely on for those who study the weather. The seesaw from one record to its opposite also has problematic implications for water management, storm preparedness and even national security.

“We might be wandering into an area where history might be a bystander,” said Mike Anderson, California’s state climatologist. “That gets a little scary because history’s here to provide context.”

All of this is playing out as the Trump Administration announced the country’s withdrawal from the Paris treaty, aimed at trying to slow climate change.

“Hydrological extremes — floods and droughts — are the most dangerous aspects of global warming because they lead to food and water shortages and that can lead to armed conflict,” said Kerry Emanuel, an atmospheric science professor at the Massachusetts Institute of Technology in Cambridge.

The U.S. Department of Defense counts floods, droughts and high temperatures as climate-related security risks, according to a July 2015 report. The U.S. has seen nine “billion-dollar” weather and climate disasters so far this year, including two floods and a freeze that brought the total to near-record levels, the National Oceanic and Atmospheric Administration said in a report Friday.

Of the 12 hottest years on record, 11 have occurred since 2003 and the only one outside that range was 1998, according to the U.S. National Centers for Environmental Information in Asheville, North Carolina. From 2014 to 2016, world records were set for the hottest year, with each 12-month period breaking the mark set by its predecessor.

“With a warmer climate, we certainly expect that extremes at both ends of the water cycle will increase — floods and droughts,” said Kevin Trenberth, distinguished senior scientist at the National Center for Atmospheric Research in Boulder, Colorado.

The atmosphere can hold about 7 percent more moisture for every 1 degree Celsius the world’s temperature rises, Trenberth said.

“In places where it’s not raining, there’s extra heat that goes into drying and exacerbating drought and wildfire,” he said.

The rains in Texas and neighboring Oklahoma set records for monthly downpours. Oklahoma City had its all-time wettest month in May with 19.48 inches of rain; 7.1 inches came on a single day, May 6, National Weather Service records show.

In Memphis, the Mississippi River reached its second-highest crest in May 2012 — 12 feet above flood stage. The river dropped 57.89 feet in height over the course of the next year.

Across the Sierra Nevada Mountains, California’s snowpack was the lowest on record in 2015, according to the NASA Jet Propulsion Laboratory and the California Institute of Technology. In April, it was 21 times larger, with individual sites that set records, the National Weather Service said. Last month, there was still snow on the peaks.

“In a warm world you swing out a little further,” Anderson said. “It may not leave you enough time to adapt.”

The end of California’s drought was celebrated. Not so much the ensuing flooding, which damaged the Oroville Dam spillway in Northern California. With extremes, maintenance becomes more difficult because dams, levees and spillways designed to handle the worst nature can dish out every once in a while now face common occurrences, Anderson said.

“It means that you can’t estimate how high to build a dike or whatever you want to do based on past observations,” said Friederike Otto, deputy director of the Environmental Change Institute at Oxford University in the U.K.

The U.K. has also experienced extremes. In 2010, the country recorded its coldest winter in 100 years, according to the U.K. Met Office, which forecasts weather and studies climate. Five years later came the mildest.

“This is the world we’re living in,” Anderson said. “You’ve seen enough now that this gets to where we need to start paying attention and figure out where the consequences are.”

The following infographic was prepared by NOAA: 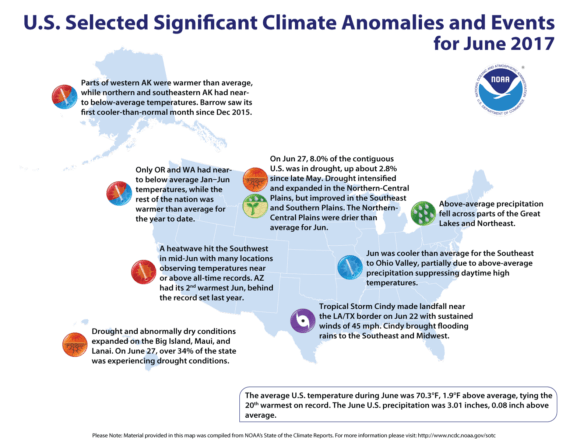