As economic sanctions pile up on Russia, there’s growing concern that export restrictions on the world’s top supplier of nuclear fuel has the potential to disrupt the U.S. power industry.

Russia produces about 35% of the world’s enriched uranium for reactors, about twice as much as the No. 2 provider, and supplies about 20% of the U.S. industry, according to UxC LLC, a nuclear industry researcher.

“If enrichment is curtailed, or supply from Russia is curtailed, it will have an immediate impact on the market,” Jonathan Hinze, president of UxC. “Because the West and countries like Japan, Korea, Taiwan and others don’t have their own enriched uranium, we rely heavily in the world on Russian enrichment.” 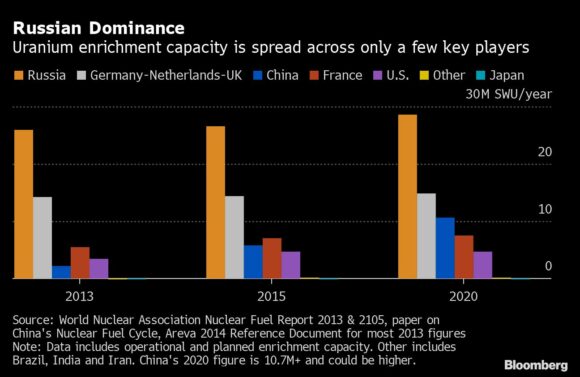 The U.S. and its allies are still evaluating options, and may exempt some energy supplies like uranium and oil from sanctions. Despite European restrictions on Russian air traffic, Hinze said one plane was allowed to deliver a shipment of fabricated uranium pellets to Slovakia Wednesday.

Nuclear power is the largest source of carbon-free electricity in the U.S. About a dozen domestic plants have closed over the past decade as cheap natural gas, wind and solar have driven down wholesale power costs. But across the globe, some are now giving the sector another look, especially as a way to reach goals to lower emissions. Fortum Oyj said on Thursday will apply for a permit to extend the lifespan of its Loviisa nuclear power station in Finland until 2050, while Philippine President Rodrigo Duterte has been considering the revival of a controversial plant built almost four decades ago but never used.

The Nuclear Energy Institute, a Washington-based trade group that represents reactor operators, said it’s monitoring the supply situation amid Russia’s invasion of Ukraine and wasn’t aware of any disruptions yet. U.S. utilities contract with a worldwide network of companies and countries to mitigate the risks of disruption, Nima Ashkeboussi, the group’s senior director of fuel and radiation safety, said in an email.

Constellation Energy, the biggest U.S. nuclear operator, said utilities typically buy fuel years in advance and maintain significant inventories that would limit short-term impacts from sanctions. The company is “well-situated to deal with any potential supply disruptions,” Paul Adams, a spokesman for the company that was spun off last month from Exelon Corp., said by email.

“The ability of reactors to run for 18 to 24 months after being refueled further insulates these plants from any immediate impact on operations,” he said.

While contracts for nuclear fuel are booked years in advance, the material itself is shipped once or twice a year, according to Hinze. “There’s no quick fix here,” he said.

“They are really in a pickle,” Chalmers said. “There is definitely a renewed interest in contracting with non-Russian suppliers.”