A day after Hurricane Ian hit Florida as a Category 4 storm Sept. 28, AM Best released its scheduled market segment report of the U.S. homeowners insurance market, calling it stable due to overall strong risk-adjusted capitalization, underwriting discipline, and technology use.

The financial strength rating agency for the industry said catastrophes remain the primary driver of volatility in the homeowners line and results this year “may be impacted by the latest hurricanes, which could pressure the segment.”

Nevertheless, homeowners insurers have generated operating profits three of the last five years despite weather- and man-made catastrophes. Though the line of business dealt with another above-average year for catastrophes in 2021 – including events such as Hurricane Ida, Texas winter freeze, tornadoes, and wildfires – the segment’s combined ratio improved by nearly four points thanks to growth in net premiums.

“Insurers have taken prudent underwriting actions and devoted significant resources to limit the impact of volatile weather patterns on results through exposure management and improved pricing sophistication,” AM Best said.

Also, a challenging reinsurance environment and inflation remain headwinds. The volatile reinsurance market continues to evaluate its portfolios and tolerance levels, AM Best said. Pricing increased in 2021, with catastrophe-exposed areas seeing the most significant increases. AM Best and Guy Carpenter expect overall reinsurance capital will be down 7% in 2022 and the market will continue to harden “at least into 2023.” Meanwhile, loss cost severity has risen on price increases for labor and materials, resulting in higher costs and delays. AM Best said many homeowners insurers have implemented “inflation guards” – automatic price increases to counter higher replacement costs and home values.

Technology remains a differentiator among insurers as lower-cost, third-party data become more available to help in pricing risk, adjust claims, and market products. AM Best said it “expects partnerships among established insurers and insurtechs to grow.”

State Farm and Allstate continued to lead the market share of homeowners insurance based on direct premiums written in 2021. Of note, Liberty Mutual leap-frogged USAA into the third spot due its acquisition of State Auto, and Progressive climbed into the top 10 on growth in American Strategic Insurance Corp., which Progressive acquired in 2015. 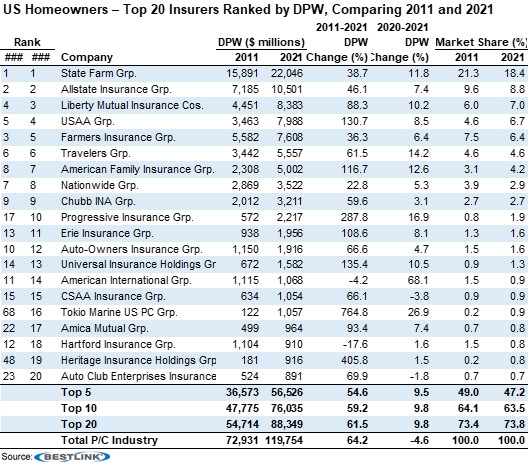 However, looking at year-to-date data as of June 30, Florida’s state-run insurer of last resort Citizens Property Insurance Corp. has seen such an increase in volume that it ranks just outside the top 10 in market share. Citizens now has 1.055 million policies in force – more than double what it had two years ago – as four Florida-domiciled property insurers and another in Louisiana that wrote in Florida were declared insolvent in 2022. 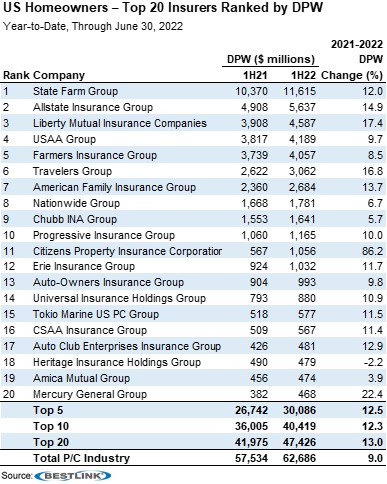 Allstate Readies Investors for Q4 Loss of Up to $335M