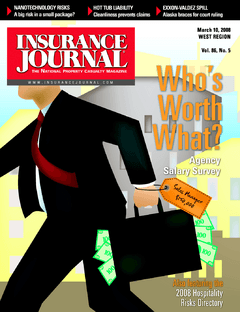 Attorneys view the ruling as 'merely round one'

How to appraise and insure historic homes

Things agents should know about the appraisal process

Are clients' most-valued items falling into the gap?

Nanotechnology: A big risk in a small package?

Who's worth what in the independent agency system?

How to hire a new producer

Policyholders need to be educated on importance of flood coverage

The spillover of bond insurer downgrades

Rep. Kanjorski on the ripple effects on nation's economy

Industry fights back against charges of bad faith