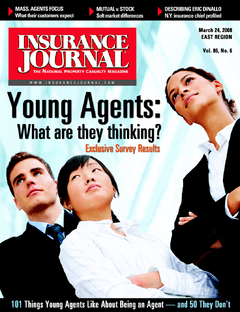 Putting out bond insurance and other fires

Demographic shifts comes in at No. 2

Loss costs going down an average of 4.2%

Dinallo urges centralization of data in an information bank

America's young insurance agents: Love and optimism in the workplace

Salute to Golden Agents: Long-time agents have no regrets, many rewards

Difference is in how mutuals build market share, says Conning

How this market is being redefined

Mass. agents find out what their auto customers are thinking

The long and short of new Mass. auto

Fitch says it's not built for the long drive

How to discourage commercial insureds from shopping their accounts