Hurricane Fiona is estimated to have caused C$660 million (US$436.8 million) in insured damage, according to the Insurance Bureau of Canada (IBC), which quoted initial estimates from Catastrophe Indices and Quantification Inc. (CatIQ).

Hurricane Fiona is the most costly extreme weather event ever recorded in Atlantic Canada and the 10th largest in Canada in terms of insured damages – surpassing the 2011 Slave Lake wildfire, said IBC.

Although the estimated $660 million in insured damage is a record-breaking figure, many affected residents were located in high-risk flood areas and floodplains where residential flood insurance coverage is not available, so most of the costs for this disaster will be borne by government, IBC explained. 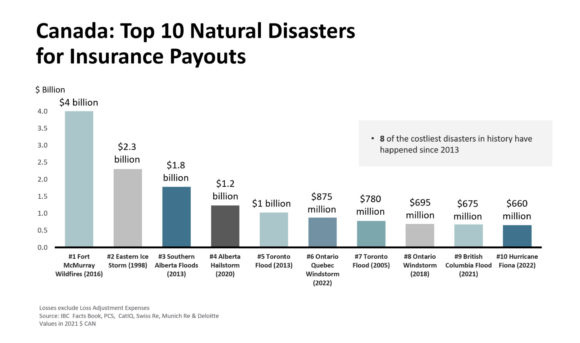 “As we begin to see the extent of damages caused by Hurricane Fiona, it is clear that much more needs to be done to enhance our resilience to extreme weather events and build a culture of preparedness moving forward,” said Amanda Dean, vice-president, Atlantic, Insurance Bureau of Canada (IBC).

“Climate change is real, and the fatalities, emotional turmoil and financial consequences we’ve witnessed must be a call to action – we must prioritize the protection of all Canadians from the impacts of climate change,” Dean said.

Insurance claims from severe weather have more than quadrupled across Canada since 2008, IBC said, noting that the new normal for insured catastrophic damages in Canada has reached C$2 billion (US$1.5 billion) annually.

IBC said it continues to advocate for governments to act on the urgent need to do more to prioritize investments that build resilience and better protect families and communities from a changing climate.

Canada must prioritize its work on a national adaptation strategy, including a high-risk flood insurance pool, to address climate-related disasters such as extreme heat, wildfires, floods, windstorms and hail, IBC continued.

Here is a breakdown of insured damage estimates from Hurricane Fiona by province:

About Insurance Bureau of Canada

Insurance Bureau of Canada (IBC) is the national industry association representing Canada’s private home, auto and business insurers. Its member companies make up the vast majority of the property and casualty (P/C) insurance market in Canada.