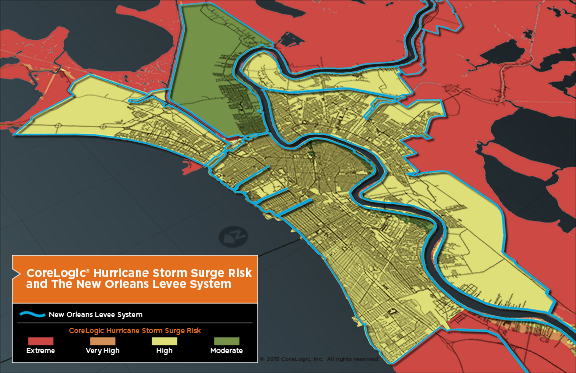 The Atlantic was active from the start of the 2005 hurricane season. By late August, there had already been 10 named storms, including one Category 4 and one Category 5. Although there was damage from some of these storms, it all paled in comparison to what happened during the last week of August with the 11th named storm of the season.

Hurricane Katrina formed in the Bahamas and grew into a Category 1 storm prior to making landfall in South Florida on August 25th. The storm weakened as it continued westward across Florida, but quickly strengthened after moving into the Gulf of Mexico. After growing into a Category 5 storm in the Gulf, it weakened slightly just prior to making landfall in Louisiana on August 29th. Coming ashore as a Category 3 storm, it pushed storm surge waters into New Orleans and the parishes in the southeastern region of the state. There was storm surge of up to 12 feet in Louisiana, and in some areas of Mississippi the surge was nearly 28 feet above the normal tide level. The levee system in and around New Orleans was breached in dozens of places, allowing flooding to expand over a large portion of the city and surrounding parishes.

The effect of Katrina on the landscape was massive, with over $100 billion in damage and more than 1,800 deaths. The aftermath of Katrina has demonstrated the resilience of the local population, with a $14-billion improvement project that expanded and reinforced the levee system in order to protect the southeastern part of the state from future storms. As a result, the levee system in the New Orleans region is one of the most extensive in the world, and CoreLogic analysis shows a significant number of homes are now protected from all but the highest category hurricanes because of the enhancements.

Although Katrina was a devastating storm, it was not the strongest storm to impact the coastal U.S. and is not the only area at risk for storm surge damage. With the potential for hurricanes to impact any location from Texas to Maine, there are many cities susceptible to the damage wrought by Atlantic storms. Human nature dictates that if a storm hasn’t occurred lately and current projections indicate the likelihood of fewer storms in the coming season, there is no reason to waste time preparing for or considering the implications of a damaging hurricane in the U.S. However, the past has taught us that it is important to know and understand the risk posed by these storms and the associated storm surge. Planning and preparing for the eventuality of a damaging storm is crucial. Having accurate data that is granular enough to identify properties at risk is the necessary starting point.