For nearly the past decade, the growing number of earthquakes in Oklahoma has gained widespread attention. As described in the CoreLogic® Insights Blog Earthquake Risk: Spotlight on Oklahoma, it has been speculated that this rapid increase in the number of earthquakes correlates with the rate of pumping of wastewater at disposal wells.1 While increased earthquake activity in Oklahoma has somewhat become the new norm, the story continues to change.

Risk managers spanning various industries, including insurance, mortgage/banking and emergency management, are eager to understand the immediate and long-term risks associated with this induced seismic activity in Oklahoma. Induced seismicity is often categorized as a transient hazard because it is expected to be short term. As such, the U.S. Geological Survey (USGS) sought to quantify the hazard due to the increased rate of induced seismicity with its 2016 report which offered a one-year snapshot of the hazard. It is important to recognize that the one-year view adopted by the USGS is the most relevant way of capturing the hazard – and associated risk – given the rapidly changing rate of induced earthquakes. As a result, the strategies for managing this risk should also be updated within a similar time frame.

What a Difference a Year Makes

For the first time in recent years, 2016 marked the first year in which the number of earthquakes in Oklahoma decreased compared to the previous year. Figure 1, based on earthquake data from the USGS, shows the number of earthquakes of magnitude 3 and higher over the past 46 years. Prior to 2009, there were fewer than three earthquakes of magnitude 3 or higher per year. Since 2009, the number of earthquakes has been on the rise year over year, reaching a maximum of nearly 850 events in 2015. This peak in activity then dropped by over 200 events in 2016,2 demonstrating the high variability in the short term. While there were fewer earthquakes in 2016, the largest earthquake ever recorded in Oklahoma occurred on September 3, 2016 – a magnitude 5.8 near Pawnee. This event, which resulted in some structural damage, proves that risk management strategies need to account for a variable rate in earthquake hazard, as well as the increased probability of large and potentially damaging earthquakes. With growing concern for more damaging earthquakes, the Oklahoma Corporation Commission’s Oil & Gas Division issued a new directive for a portion of the state that limits the growth of future disposal rates.3

Figure 1: Number of Earthquakes Magnitude 3.0 and Higher Per Year in Oklahoma 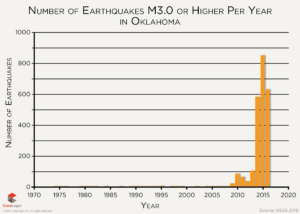 On March 1, 2017, the USGS released an updated view of hazard, which indicates the hazard due to induced seismicity in the central U.S. has decreased. This decrease is attributed to the fewer number of earthquakes in 2016 compared to 2015. Speculating the cause for the decrease in the number of earthquakes, the USGS states, “This may be due to a decrease in wastewater injection resulting from regulatory actions and/or from a decrease in oil and gas production due to lower prices.”4 The price of oil began decreasing in 2014, which led to a decrease in oil production.5

How High Is This Hazard?

To put things in perspective, the USGS compares this short-term induced seismicity hazard in Oklahoma to California, an area where earthquakes are historically more common. This comparison, shown in Figure 2, indicates that there is up to a 12-percent chance of damage in Oklahoma, which is on par with, or more than, the highest hazard areas in California.4

Figure 2: USGS Forecast for Damage from Natural and Induced Earthquakes in 2017 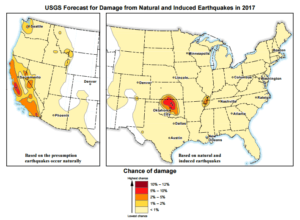 Source: USGS
Looking at the severity of earthquakes in these two states, the number of events in the magnitude 3-to-4 range is significantly higher in Oklahoma (Figure 3). Even though California did have fewer total earthquakes in 2016, there was a greater number of events higher than magnitude 4. The larger events are of greatest concern due to the potential damage that may occur. 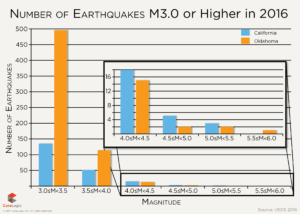 Due to its offshore location, the magnitude 6.6 earthquake that occurred on December 8, 2016 is not included in this dataset. The earthquake, with a location approximately 100 miles offshore from Ferndale, CA, was lightly felt in coastal regions of northern California and southern Oregon, but no damage was reported nor would any be expected given the far distance offshore. This earthquake surpasses the magnitude 5.8 earthquake in Oklahoma as the largest earthquake in the U.S. in 2016, but the Oklahoma earthquake remains the largest earthquake on land, closest to the population and exposure at risk with the strongest ground shaking intensity felt in 2016.

The USGS reports for hazard due to induced seismicity demonstrate that the short-term view of hazard is comparable or higher in Oklahoma than in California. However, risk cannot be assessed with hazard data alone. By definition, risk occurs when a hazard intersects with exposure.

Over the long term, with its history of large, damaging earthquakes and greater population exposed to the hazard, California remains the top-ranked state for overall earthquake risk in the conterminous U.S. However, the short-term view of increased hazard due to induced seismicity in Oklahoma is important to appropriately plan for and consider. Even with fewer events in Oklahoma in 2016 compared to 2015, the September 3 Pawnee earthquake is a stark reminder that the risk is real. The USGS is committed to updating its one-year view of hazard due to induced seismicity on an annual basis, and as an industry leader in earthquake risk modeling, CoreLogic remains committed to adding insights on its risk to help guide risk managers across all sectors, including insurance, mortgage/financial and government, in order to adequately prepare.