Situated along the eastern edge of the Pacific Ocean’s “Ring of Fire,” California is in the middle of earthquake country, and planning for the next one is crucial. The Hayward Fault is one of the most active faults in California’s San Francisco Bay area. The most recent large earthquake on the Hayward Fault occurred on October 21, 1868 (M6.8) causing minimal damage to the sparsely populated region.[1] Today’s San Francisco Bay Area is a very different from San Francisco in 1868, though, and a recurrence of this earthquake today could cause significant damages.

The 2014 Working Group on California Earthquake Probabilities calculated that there is a 33 percent likelihood of a large (magnitude 6.7 or greater) earthquake occurring on the Hayward Fault within three decades.[2] Planning for the occurrence of a major earthquake along this fault is essential to protecting homes and businesses from personal and financial catastrophe in Northern California.

The United States Geological Survey (USGS) developed the HayWired Scenario as a planning tool to enable better action plans for preparing for this massive earthquake. The scenario postulates a magnitude 7.0 rupture along the Hayward Fault, and 16 aftershocks. 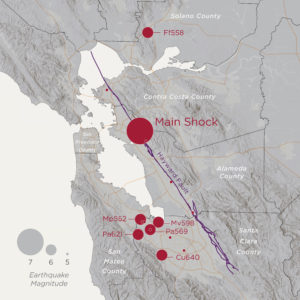 “By illuminating the likely impacts to the present-day built environment, well-constructed scenarios can and have spurred officials and citizens to take steps that change the outcomes the scenario describes, whether used to guide more realistic response and recovery exercises or to launch mitigation measures that will reduce future risk.”[3]

In conjunction with the USGS, CoreLogic provided a perspective of the insured losses for this scenario. The goal of the analysis and accompanying report is to better prepare the industry for such an event and begin to rethink how we respond to these disasters, thus improving our ability to recover. Applying CoreLogic real estate and insurance data and analytics to this scenario determines that this shaking scenario (evaluating shake-including liquefaction, earthquake sprinkler leakage, and fire-following perils) would likely cause about $170 billion of damage in the San Francisco Bay Area. Insurance recoveries would only provide about $30 billion for restoration, leaving a $140 billion financing deficit. A detailed analysis of housing determines that approximately 1 million homes would be damaged, almost 10 times the 114,000 residential and commercial structures damaged in the 1994 Northridge, California earthquake[4]. An earthquake of this severity is unprecedented in modern California history.

The 2018 HayWired scenario includes 16 aftershocks with the largest being a magnitude 6.4 occurring closer to San Jose; the aftershocks contribute to almost 10 percent of the total estimated damages from this scenario. This analysis included estimation of the incremental damage (shaking damage to properties that were already damaged) and earthquake insurance contract terms which includes an earthquake occurrence definition that covers all aftershocks within a specific time interval. With aftershocks distributed throughout the Bay Area, this scenario highlights the need to prepare for a broader potential damage area.

Earthquakes present a threat to the continued operations of our real-estate economy. Preparing for realistic scenarios helps us shift from a shift from a tradition of reacting to events to a culture of prevention and resilience.

Read the full CoreLogic HayWired special report to learn more about the losses, damage, and impact the scenario would have on the region—and what this teaches us about where we stand today.