Severe convective storms—the group name given to tornadoes, hail, and straight-line winds—are among the most common and damage-inducing natural catastrophes in the United States, frequently topping the lists of annual claims for most insurers.

On Sunday, March 3, an early-season outbreak of tornadoes raced across areas of Alabama, Georgia, Florida, and South Carolina. In a few hours, over 40 tornadoes touched down, the most damaging of which rated an EF4, classified as having between 166 and 200 mph winds. This tornado occurred south of the community of Beauregard, Alabama, where 170 mph winds wreaked destruction nearly one mile wide. Sadly, it claimed at least 23 lives, the deadliest tornado to occur in the U.S. since in over 5 years. 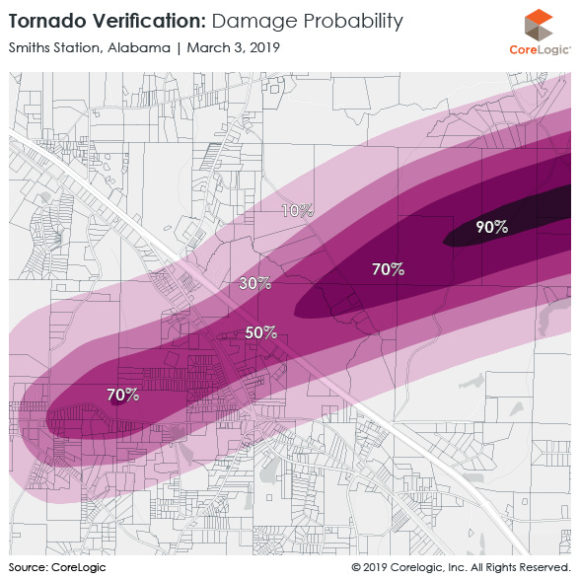 The image shown above is a high-resolution map of the area near Smith Station, Alabama, with highlighted contours of the damage swath from the tornado breakout of March 3.

Numerous tornado touchdowns over a broad area impacted many homes and businesses that day. Tornado damage is generally driven by intense wind speed and direction along the path. CoreLogic Reactor produced a quick snapshot of the severity of events on that day.

Tornadoes are a unique attritional peril in that even a brush against one can be catastrophic for homes and the lives of the people in them. To truly be resilient, carriers need more than an understanding risk—preparing homeowners for anything that may come their way, given this information, is the critical tipping point.

For more information and to keep up to date with events as they happen, please visit our natural hazard risk information site Hazard HQ™.

Daniel Betten is a principal research scientist for CoreLogic. In this role, Daniel is responsible for meteorological science as it relates to the CoreLogic suite of weather verification products inclusive of proprietary CoreLogic technologies for hail and wind verification. Daniel is a self-proclaimed problem solver with more than nine years of experience in the field of meteorology. Daniel was undertaking his Ph.D. while taking part in eight different scientific field projects that collected observations in tornadoes, hailstorms, and hurricanes. His research has focused on multiple radar wind synthesis, combined radar analysis with lightning data, and the development of a complex 3D trajectory calculation and visualization method. He has been published in notable industry publications including the Journal of Atmospheric and Oceanic Technology and has co-authored papers published in Monthly Weather Review, Journal of Atmospheric Science among others. He began his career at Weather Fusion, later acquired by CoreLogic which has since become a key part of the Insurance & Spatial Solutions Group. While at Weather Fusion he engaged with industry leaders to provide solutions surrounding hail, wind and lightning damage related to auto hail dent repair and roof repair. Daniel earned M.S. in Meteorology, B.A. in Meteorology, and minor in math and hydrology from the University of Oklahoma. He is currently finishing his Ph.D. in Meteorology, also at the University of Oklahoma.