Earthquake risk in California is no secret. For years scientists have been warning the state is overdue for a large damaging event. Nearly 30 years ago, the 1989 Loma Prieta earthquake hit the San Francisco Bay Area with a devastating 6.9 magnitude (M). About four and half years after that, the 1994 M6.7 Northridge earthquake ravaged the San Fernando Valley. It has been 25 years since the last big earthquake, with communities growing complacent as earthquake risk was not top of mind.

That all changed on July 4 and 5 when two large earthquakes struck near Ridgecrest, California, a fairly remote region in the Mojave Desert.

The largest earthquake in the sequence, an M7.1, struck on Friday, July 5 at 8:19 p.m. local time in California near Ridgecrest. This event was preceded by an M6.4 event on Thursday, July 4. Hundreds of foreshocks (those preceding the M7.1 event) and aftershocks (those following) have been recorded in this earthquake sequence. Fortunately, damage was limited to the immediate region closest to the epicenters due to the remote location of these earthquakes. Still, these earthquakes garnered a lot of attention given their magnitude and the fact that they were broadly felt by millions across California and Nevada.

San Andreas is not the only fault with some level of threat. There are a number of other faults in California that have the ability to cause significant damage and disruption. The Hayward fault, which runs through the San Francisco East Bay last experienced a major earthquake 151 years ago when an M6.8 event struck in 1868. Research indicates that major earthquakes occur along the Hayward fault every 150 years. A 2018 CoreLogic study that analyzed the USGS HayWired scenario estimates that an M7.0 earthquake followed by a series of aftershocks could cause approximately $170 billion in damage. Over 1.1 million homes would have visible damage from this event.

In Southern California, the Los Angeles Basin has several faults which contribute to the high seismic hazard of the region. In particular, the Puente Hills fault that runs underneath Los Angeles has the greatest potential for damage. A 2015 CoreLogic study estimates that an M7.3 earthquake on the Puente Hills fault could be one of the worst case scenarios for damage with estimates between $350 billion and $450 billion. While a full rupture of the San Andreas would be a larger earthquake, much of the San Andreas fault does not run directly under densely populated areas. Many of the would-be impacted regions would not experience full loss. Given the dense exposure in Los Angeles and the proximity of the Puente Hills fault to the city’s downtown area, the latter example is so extreme.

Even with the looming risk of a damaging earthquake in California, insurance take-up rates remain quite low with only 13% of Californian residences having purchased an earthquake insurance policy according to a study by the California Department of Insurance. Because of this, the insured loss from these earthquake scenarios is relatively low. To compare to a more frequently-occurring disaster, recent hurricane and flood events across the U.S. have spotlighted the insurance gap in flood. Following Hurricane Harvey in 2017, CoreLogic estimated that 70% of the residential flood damage was uninsured. In a major damaging earthquake, this gap could be even greater.

Earthquakes will always continue to occur in California. From personal preparedness and mitigative efforts to strengthen buildings to acquiring earthquake insurance for financial protection during recovery, there’s a lot that can be done to prepare. And preparation, ultimately, is the key to resilience. 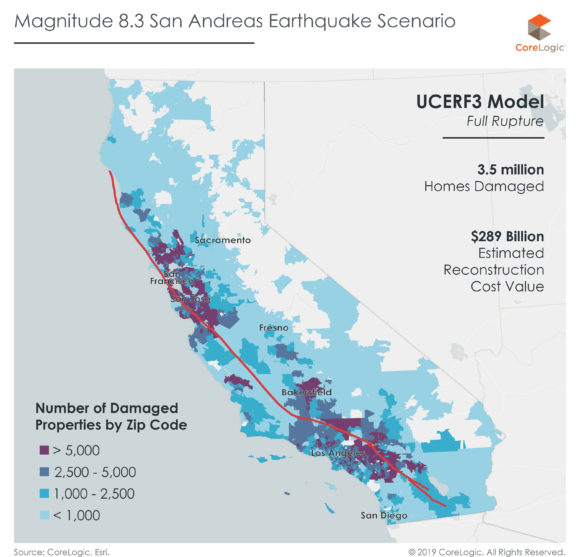