Losing data strikes more fear in businesses than getting hacked.

While losing data topped the list, followed by concerns over hacking, it appears few companies are worried about their employees misusing technology. Seven percent of those polled cited that as a concern.

I honestly think that people don't realize how many mistakes people make throughout the day. 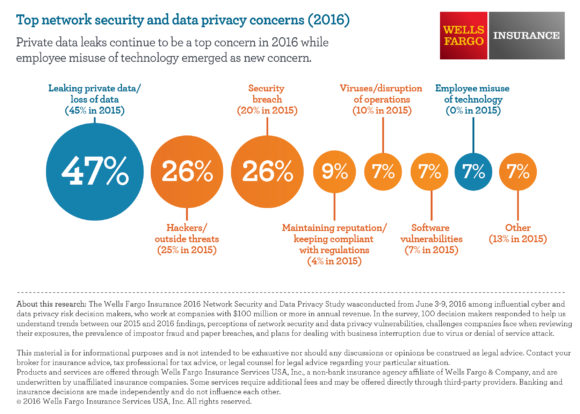 “I honestly think that people don’t realize how many mistakes people make throughout the day,” Cusick said.

“Human error is a huge factor,” she said. “And that is what gets people every time.”

While many companies have yet to wake up to potential problems caused by employee misuse, Cusick believes a few businesses are beginning to recognize it as emerging problem.

No respondents in the 2015 Wells Fargo Insurance survey named employee misuse as a concern.

Cusick reasoned the slight uptick reflected in this year’s survey may come from more companies possessing the tools to figure out where breaches are occurring.

“I think people are able to engage better forensics,” she said, adding that a number of companies have developed the ability to drill down and discover the point of entry in attacks and breeches.

Spear phishing from foreign hackers targeting employees is one trend Cusick is seeing is more of.

“They’re falling for spear phishing attacks and downloading these viruses into the system,” Cusick said.

One of her clients became the victim of a spear phishing attack when an employee clicked on an email that prompted the recipient to “Click here to find out how much vacation time you have.”

The email looked like it was from human resources, but when the web browser opened it was a different link, Cusick said.

Another type of scam that seems to be popular lately is fake photocopier repair personnel coming to offices and telling a receptionist they are taking the office’s copier in for repair.

Most modern photocopiers have large capacity hard drives embedded in them, Cusick noted.

These are among the reasons why Cusick and others in the industry are encouraging clients to beef up employee awareness training, such as teaching employees to check with the office manager before letting office equipment out the door, and that emailed requests to log onto a third-party portal should raise a red flag, as should emails with a strange font, or a fuzzy company logo that may have been copied and pasted into an email.