Now six months later, the 63-year-old bridge repairman and his fiance are all but alone in their Oakwood Beach neighborhood on Staten Island’s flood-prone Atlantic seafront. And they have had enough.

“If you stay, you’re rolling the dice,” Szczesny said, over coffee and a cigarette at his tidy kitchen’s table in late March. “And I don’t feel lucky.”

Szczesny and nearly all of his neighbors have volunteered to sell their homes to New York State under a $400 million program spearheaded by Governor Andrew Cuomo. So far $171 million has been approved. The first-term Democrat hopes to take more than 1,000 high-risk properties off the market and reduce the state’s future storm liability. 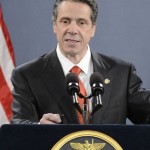 For those who qualify, the plan could pay them 100 percent of their property’s pre-storm value, a price most could never hope to achieve in the post-Sandy open market given the extensive damage many homes suffered and the prohibitively expensive flood insurance premiums potential buyers would face.

The program, among the most ambitious post-disaster property buyouts ever pursued, is one element of Cuomo’s bid to fortify New York against future natural disasters after Sandy effectively shut down the U.S. financial capital, flooding subway tunnels, spurring gasoline shortages, crippling the power supply and leaving thousands homeless for months.

“There are some parcels that Mother Nature owns,” Cuomo said in his state of the state address. “She may only visit once every few years, but she owns the parcel and when she comes to visit, she visits.”

With a reelection campaign looming next year and widespread views that he has ambitions beyond New York, it is vital that Cuomo be seen as delivering on his Sandy-recovery agenda.

The U.S. Department of Housing and Urban Development, which Cuomo headed under President Bill Clinton, green lighted the first chunk of block grants that can be used for the buy-out program. The money comes from the $50 billion Sandy relief package Congress approved earlier this year.

The focus of New York’s proposal – which piggybacks on an existing Federal Emergency Management Agency program – is on substantially damaged homes in so-called V-Zones, some of the highest-risk areas on FEMA flood maps. Homeowners would get the full, fair-market pre-storm value for their property.

Those lots could not be redeveloped. Instead, they would be left as a natural buffer zone to protect against future storms.

Money from FEMA’s hazard mitigation grant program pays for 75 percent of those buyouts. The remaining 25 percent must come from local government sources – and after Sandy, that is likely to be the just-approved HUD funding.

Some homeowners may get up to 15 percent enhanced buyout payments – if they relocate in the same county or agree to move with a group of their neighbors, for example.

Separately, New York can also use HUD block grant money to buy homes inside the 500-year floodplain – but at their post-storm value. However, because they wouldn’t be purchased under FEMA’s program, the land could be redeveloped.

Cuomo wants to spend up to about $400 million on the buyout plan, his office has said. The average, unweighted median home value across Brooklyn, Long Island and Staten Island, the areas targeted for the program, is about $479,000.

Not all homeowners who have expressed interest will qualify, and some may ultimately decide to stay put. In the end, New York officials expect up to 1,500 homeowners could be bought out.

Next door in New Jersey, Governor Chris Christie has said the state should use $250 million to buy about 1,000 properties. But there is no funding set aside for buyouts in Christie’s plan, approved last week, for how to use New Jersey’s first $1.8 billion chunk of HUD block grant money.

Post-disaster buyouts are not new. FEMA has helped fund the purchase of more than 40,000 properties over the past decade, but the average transaction takes 12-to-18 months to close and large-scale purchases in a pricey market like New York’s are rare.

The Cuomo administration is hoping to complete its buyouts in just six-to-nine months, meaning transactions would close this summer, according to an administration official, who was not authorized to speak publicly about the program.

But it could be much longer, if the experience of upstate residents washed out by Hurricane Irene and Tropical Storm Lee in 2011 is any guide.

Three hundred miles north from Oakwood Beach in New York’s Adirondack Mountains, dozens of property owners signed up for buyouts after Irene and Lee left the tiny hamlet of Jay a shambles. Twenty months later, just over half of them qualified for buyouts and not one has received a check.

The buyouts after Irene and Lee “have taken too long and involve too much red tape,” said Peter Cutler, a spokesman for New York State’s Division of Homeland Security and Emergency Services.

“We have been working with the state of New York to help them streamline the Hazard Mitigation Grant Program,” a FEMA spokesman said in response.

Oakwood Beach, has long been a tight-knit, working-class community, where people watched out for each other and children played in the streets. While less than 20 miles south of bustling Manhattan, it is a world apart, built next to a national park and surrounded by wetlands. It is a flood-prone area.

A 1992 nor’easter flooded the community badly, leaving several feet of water in the streets, according to resident Tina Downer.

Neighbors formed a flood victims group that pushed to build a berm themselves, but they were not allowed. They wanted a levy system, or for the creek to be dredged regularly as it used to be. They wanted the replacement of a flood gate or seawall, both of which had been destroyed over the years and never repaired, they said.

Eventually, they got “emergency” berm repair that took eight years to build, they said.

But the community’s organization back then is likely to pay off now. Buyout programs work faster when whole neighborhoods are united in their desire to sell and when local governments communicate well with state and federal officials.

“I believe that ours is going to be historic in terms of timing,” Downer said. More than 185 homeowners in a roughly four-block radius of Oakwood Beach are pinning their hopes on Cuomo’s promises.

The neighborhood now is a ghost town. At the desolate end of Kissam Avenue, at least a half-dozen homes have vanished, leaving only their foundations and a tire swing hanging from a big tree.

Marie Ecker, 66, and retired, thought she would spend this spring watering flowers in front of the bungalow she called home for 40 years. But she doesn’t live there anymore.

“(Sandy) was just like the last straw that didn’t even allow you to fool yourself into thinking it was OK to stay,” Ecker said.