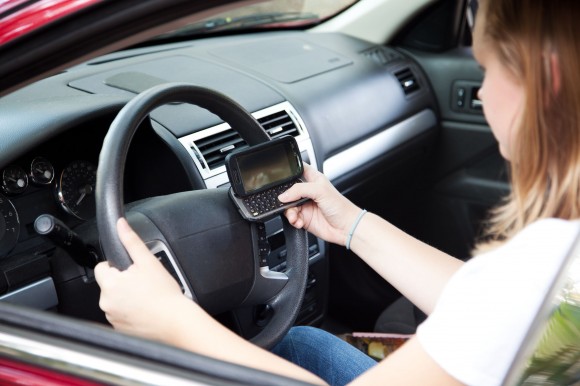 A New Jersey state appeals court has ruled that a text sender could be held liable for a crash caused by her text’s recipient — but only if the person sending the text believes the driver will immediately respond, and jeopardize others on the road.

Meanwhile, Iowa’s Department of Transportation has developed a smartphone application that turns off a phone’s texting ability when it detects a speed in excess of 15 mph. The state agency’s app will be called TXTL8R, short for “text later,” according to the Des Moines Register. (Several commercial apps that block texting or warn drivers of local laws are also available.)

When will drivers figure out on their own that they can save lives — maybe even their own — by putting down the device, hooking their thumbs to the wheel and keeping their eyes on the road?

New York is among the 41 states (along with the District of Columbia) to ban text messaging for all drivers, according to the Insurance Institute for Highway Safety. In New York, distracted driving is a primary offense, meaning police can pull over drivers for that act alone. And as of July 1, drivers caught texting have faced tougher penalties — including more costly points on their license and, for young drivers, longer license suspensions.

There’s also been a plethora of public awareness campaigns that focus on the dangers of distracted driving, including texting. Just about everyone knows the dangers. According to a recent AT&T survey, 98 percent of respondents said they were aware texting and driving wasn’t safe. The statistics show they’re right. Drivers who are texting are 23 times more likely to get into an accident than other drivers, according to the Virginia Tech Transportation Institute. According to the U.S. Centers for Disease Control and Prevention, 3,300 people died in accidents involving distracted drivers in 2011.

The New Jersey three-judge panel’s ruling hinted at how hard it would be to prove that a texter knew that a recipient was driving, and would engage with the phone instead of the road. The judges’ ruling ultimately upheld an earlier dismissal of a lawsuit against a girl who had repeatedly texted her boyfriend as he drove, and then crashed into a motorcycle, injuring two.

According to the Daily Record in Morris County, N.J., the ruling stems from a 2009 case in which 17-year-old Shannon Colonna was texting with her boyfriend Kyle Best as he left work and got in his car. They had exchanged about 62 texts when Best crashed into Linda and David Kubert, who both lost their left legs in the crash.

Despite stating that a text’s sender could face civil damages in certain circumstances, the judges ruled they could not find evidence that Colonna knew Best would respond.

The majority wrote: “We do not hold that someone who texts to a person driving is liable for that person’s negligent actions; the driver bears responsibility for obeying the law and maintaining safe control of the vehicle.” But, the panel wrote, “if the sender knows that the recipient is both driving and will read the text immediately, then the sender has taken a foreseeable risk in sending a text at that time. The sender has knowingly engaged in distracting conduct, and it is not unfair also to hold the sender responsible for the distraction.”

It makes sense to protect everyone on the road by refraining from texting someone you know is driving. It makes even more sense for drivers to refrain from reading and responding. If personal responsibility isn’t enough of a motivator, now there’s tougher penalties for drivers and the threat of civil liabilities for texters.