As images and sound are beamed from the UK to devices all over the world, insurers and reinsurers will play a key role in the transmission of the 2012 Olympic Games that run from July 27 to Aug. 12 in London. Lee Tookey, head of Aviation Reinsurance, Space and Specialty Lines for Aspen Re, discusses the challenges for the insurance industry in helping to bring the games to the world. 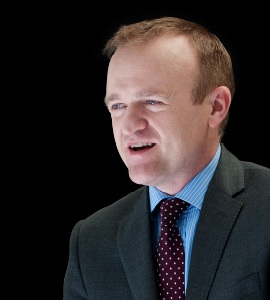 Advances in personal mobile communication technology have led the London 2012 Olympics to be dubbed “The Smartphone Olympics.” For example, YouTube will broadcast the games live in Asia and Africa free of charge, and has teamed up with NBC to deliver full online coverage in the United States. While cellular network capacity has increased significantly in recent years, it will still be under pressure to accommodate the expected level of demand.

The same is true for most parts of the radio frequency spectrum, which required careful planning by the UK communications regulator, OFCOM. Wireless technology will allow positioning of cameras and microphones in order to give a groundbreaking viewing experience and these are just two types of the wireless device to be used in the Games.

Timing and scoring systems and event commentary, along with security cameras and walkie-talkies have contributed to the estimated 20,000 applications for frequencies. This huge demand will, in part, be accommodated by temporarily reassigning bandwidth reserved for public sector bodies along with the bandwidth freed by the recent switch to digital TV.

Broadcasters’ dependency on satellite technology has increased significantly and mobile satellite trucks, as part of Satellite News Gathering (SNG) systems, will be a common sight at Olympic venues. The use of such systems is highly regulated in the UK and OFCOM made special provisions for the Olympic Games.

Inmarsat, based in London, is one such provider of SNG capability via its BGAN system. This uses its powerful 4-series satellites, first launched in 2005, to provide live video transmission as well as Internet and e-mail. The use of satellite technology, however, exposes the broadcasters to a new risk.

Space weather can weaken the signal between the Earth and the satellite. One indicator of the environment affecting the way satellites operate is observed cooler areas of the sun from which solar matter is ejected into space, namely sun spot activity. Periods of intense activity may cause temporary blackouts or, in extreme cases, damage satellites. Compared with the Olympic years 1992 and 2000, the first five months of 2012 has been relatively quiet, with an average of 81 sunspots observed each month.

In 2012 sunspot activity is considerably higher than that observed in 2008, when the average sunspots observed was less than seven per month over the comparative period. Satellite operators have developed strategies to preserve their equipment during intense solar events, but disturbances in the atmosphere affecting the link to Earth are beyond their control. The growth in demand for satellite capacity has been relentless. This has called not only for continuing development by manufacturers, but has also presented challenges for the space insurance market. 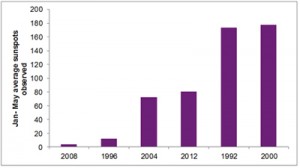 The challenges for the industry have been twofold.

First, insurers must be confident that they have sufficient information about the risks they underwrite, drawing on engineers’ knowledge to assess the risks associated with a new project. They need to understand all stages of a satellite’s life – from design through construction, to launch and operation – given that coverage is broad and is essentially a product guarantee policy. Assimilating such facts can be challenging, given the commercial interests restricting the flow of information. Secondly, as satellites become more powerful and able to support significant revenue streams, there has been a large increase in insured values. In 1964, the Tokyo games were beamed live to the US using the Syncom 3 satellite. This weighed 68kg and generated a meagre 29w from its solar panels to facilitate the broadcast of just one TV channel (2).

The contrast with the recently launched SES-4 is striking. Its vital statistics include weighing-in at six tonnes and an ability to generate 20kW of power. It can deliver hundreds of TV channels, including HD and 3D (3,4). Insurers have been squeezed from both directions as rates have also fallen, and so the relationship between annual market premium and the largest satellite value has deteriorated.

The broadcast rights for the Olympics have escalated in value. The total broadcasting rights for the 1964 Tokyo Games, which featured the inaugural satellite transmission, were sold for $1.6 million (5). US rights to the 2010 Winter and 2012 Summer Olympic Games were purchased by NBC for $2 billion (6). Increases in this revenue stream have been a key driver of the cancellation insurance market.

The detailed planning and risk mitigation strategies of the IOC, along with the London Organising Committee of the Olympic Games (LOCOG) manage much of the risk, but some events have called for risk transfer through the insurance markets. The reputational risk for the IOC and the Host City is at least as great as the financial risk which can be assumed by insurers and such alignment of interests is ideal for those insuring the risk.

Providing terrorism coverage for the organisers is one of the biggest challenges to the insurance market. But since the 9/11 attack, the IOC considers this an integral part of the insurance protection it buys. Ever since the Black September Group attack on the Israeli team at the Munich games in 1972, organisers of the Olympic Games have laid detailed security plans to protect athletes and spectators.

Whereas natural catastrophe risk was probably a greater threat than political risk for the Beijing Olympics in 2008, the threat of a terrorist attack disrupting the 2012 Games was recognised from the initial stages of the bidding process. The armed forces will join with the police and private security companies to reduce the risk in London.

Careful planning, great athletes and new technology should combine to give viewers the most spectacular, high definition games. Mobile technology will also deliver the spectacle to a larger global audience. Even where there is no cell coverage, handheld devices can receive Olympic broadcasts – the same Inmarsat satellite used by broadcasters can send streaming video to satellite mobile phones. Some events at the games – most notably the opening and closing ceremonies- are expected to attract audiences around the world numbering perhaps four billion: the insurance industry will certainly play an important role in both terrestrial and extra-terrestrial aspects of these Olympic events as they are transmitted.

Tookey is head of Aviation Reinsurance, Space and Specialty Lines, for Aspen Re. He took his first role with us in 2004 as a marine and aerospace reinsurance underwriter in the specialty team. He started his career as a trainee actuary with St. Paul Re in 1994. Four years later he joined Tig Re – now Odyssey America Re – as marine and aerospace underwriter. During this time, Tookey developed one of the largest space reinsurance accounts in London. He has a special interest in space tourism, and his team also focuses on personal accident, contingency, nuclear power, bloodstock and livestock, crop (U.S., Australia and London) and miscellaneous lines.

What the New U.S.-China Trade Agreement Says on Insurance