The problem, emphasize insurance executives, is that properties and economies with high insurance penetration recover much more quickly after a natural disaster than properties that rely on governments for their recovery.

Swiss Re estimates that the global protection gap for weather-related risks is at least $180 billion. It’s a huge figure and a huge challenge because the solutions potentially exist, but they are not being used, said Christian Mumenthaler, group CEO of Swiss Re, who spoke on a panel on underinsurance at the reinsurance Rendez-Vous de Septembre (RVS).

“This protection gap exists everywhere,” he said, pointing to new risks such as cyber, drones and new technologies.

“It also exists in life and health on a very big scale,” he affirmed. “There are a lot of products that could protect families if someone dies, for example, and aren’t that expensive, but people don’t buy them—so there is a big, big life and health protection gap.”

Hurricane Harvey, which hit Texas at the end of August and early September, provides another powerful example of the protection gap. With economic losses estimated by RMS to be in the range of $70 billion to $90 billion, its insured losses, mostly from flood, were estimated by the catastrophe modeler to be just a fraction of that: $25 billion to $35 billion. (These were the latest figures available from RMS at the time of this writing in December.)

There is plenty of evidence that if the economic loss from a natural catastrophe has a higher percentage that’s insured, “then the economic recovery is quicker, the human deprivation is lower and the cost to the taxpayer is lower,” said Stephen Catlin, special adviser to XL Group CEO Mike McGavick.

Before his retirement, Catlin was XL’s deputy chairman. He currently is chairman of the Insurance Development Forum (IDF), which aims to reduce the insurance protection gap in emerging nations.

Catlin, who moderated the RVS panel, pointed to the example of New Zealand—where two-thirds of the nation’s property owners were covered by insurance. As a result of this high insurance penetration, New Zealand recovered more quickly from its devastating earthquakes in 2010/2011, he said.

Mumenthaler said the situations that create protection gaps vary across the globe.

As an example, in many western countries, there are available and affordable insurance solutions to protect against natural catastrophes, but people don’t buy them, he said.

Italy’s October 2016 earthquakes revealed that only 1 or 2 percent of the households were covered. However, Mumenthaler said, the 1 percent who had insurance received their check and have rebuilt their houses, while the rest, who were helped by government, are still waiting.

The Italian Civil Protection Agency estimates the economic losses from the October earthquake series at €16.5 billion ($19.2 billion). PERILS, the independent Zurich-based organization that provides industrywide catastrophe insurance data, estimates the earthquakes had insured losses of €208 million ($241.6 million), which means that just 1.3 percent of the overall economic loss was insured.

And for California, the situation is the same.

“They know there are going to be earthquakes in California,” Mumenthaler said. “They have always existed, and yet only 12 percent of the people who have a fire policy have earthquake cover, so it’s a huge gap.”

He said the least amount of progress has been made in closing the protection gap in western economies, which is “a bit depressing for our industry.”

“The proportion of total losses covered by insurance is estimated at only 40 percent in 2017, despite the relatively high insurance penetration rate prevailing in the U.S.,” said the report.

Aon Benfield noted the insurance recovery ratio in the U.S. in 2017 was estimated at 47 percent, which is below the 17-year average of 54 percent, due to the relatively high proportion of losses caused by flooding, particularly during Hurricane Harvey.

On the other hand, the industry and initiatives like the IDF have had more success in closing the protection gap in emerging nations where even when insurance exists, people can’t afford it.

“There I’m more encouraged. Over the last 10 years, a lot of us have been engaging with governments…to find new solutions,” Mumenthaler said, admitting, however, that it’s a long process.

“If you approach governments for the first time, they will have a lot of prejudices about the insurance industry. They have a lot of frustrating stories,” he said.

“But as you explain what you do, and you get people to get more comfortable about what we do, we’ve had a lot of successes across the world, including very poor countries like Kenya, Malawi, Vietnam, etc., where hundreds of thousands of people have been covered through schemes that were sponsored by [Swiss Re and other companies] and sometimes brokered by the big brokers,” Mumenthaler continued.

Technology is helping a lot with insurance penetration, he affirmed.

“You cannot have huge costs in these instances, so new technologies like satellite imagery actually help to determine when to pay, without having tens of thousands of claims adjusters running around,” he said.

As an example, the technology that exists in Kenya where people can have money transferred using their phones actually is a very efficient way to transfer the funds after an event, he said. “To a certain extent, some of the most digital value chains I’ve seen in insurance have happened in other countries like Kenya.”

There has been progress made, but it’s not enough for companies to work on their own, as Swiss Re has for about a decade.

When the idea for the IDF was formed, he said, Swiss Re supported the project because a huge part of IDF is sharing knowledge and education. “This is where we need all the resources from the industry,” he said.

“IDF has made great progress,” Mumenthaler said, adding that IDF representatives know how to talk to governments.

One of the big challenges to bringing natural disaster insurance into emerging nations is the lack of models and data to support the models, which Ian Branagan is trying to address as co-chair of the risk modeling and mapping working group of the IDF. In his day job, Branagan is senior vice president and group chief risk officer at Renaissance Re.

During his talk at the RVS, he discussed extending risk modeling capabilities to the most vulnerable countries in the world.

The absence of models and data to support the models in the developing world is the key issue of the slower development of resiliency and disaster risk financing in those countries, Branagan said.

The absence of these models is partially due to the fact that historically, both in the private sector and the public sector, development of models to understand natural hazards has been done on a demand-led way, he explained.

“In the insurance industry, that’s typically if there’s an existing or foreseeable, reasonable economic opportunity of some sort. This is true not just across natural hazards. This is true across many perils, such as cyber,” he added.

On the other hand, in the public sector, demand typically follows an event, Branagan noted. “All too often, when bad things happen, the risk understanding and the risk tools and the models to be able to provide preparedness and financing aren’t there when they’re needed.”

As a result, his IDF risk modeling and mapping group has comes up with a plan to solve the absence of models in some developing regions by moving away from the demand-led approach. (He explained that the group is composed of about 50-60 individuals from academia, the private and public sectors, commercial modeling companies, and a host of others.)

If the public and private sector really want to develop models in a more efficient, effective and speedy manner, then a collaborative strategic modeling agenda should be created and funded, Branagan continued.

“What that means is selecting a suite of countries for which a collaborative effort will be employed to develop out the underlying hazard, exposure and risk models, building capabilities for understanding risk in the region,” he said. “It will enormously speed up the process and create much greater efficiency to bring disaster risk financing to those regions.”

While there is still an enormous amount to do, Branagan said, “there is enough effort and money already being spent to significantly make a dent in the provision of risk models and risk data in the developing world.”

In his presentation at the RVS, Rowan Douglas, CEO Capital Science & Policy, Willis Towers Watson, said that IDF is helping to address the “deep misunderstandings” that exist about the insurance industry’s appetite for risk.

“If you talk to the wider world outside…our industry, they would assume that the industry is quite scared of risk,” Douglas said, explaining that many people assume the growth of risk in the last 25 years, due to climate change and population and economic growth, “is something that actually puts off our industry.”

Governments and international institutions, such as the World Bank and the United Nations, have commonly thought the insurance industry has an aversion to risk when in reality it seeks more risk transfer opportunities and more risk diversification, explained David Simmons, managing director, Capital, Science & Policy Practice, Willis Towers Watson, who works closely with Douglas and the IDF. (Simmons provided his comments by email.)

As a result of these misapprehensions, the IDF frequently has to explain that “our industry feels fundamentally quite comfortable with those risks,” especially natural catastrophe risks, said Douglas during his presentation.

The industry needs to stimulate the generation of demand for insurance by creating the right mechanisms to enable people to consume risks either individually or collectively, which is being helped by the IDF and other risk facilities seeking to bridge the protection gap, he said.

The need to understand risks that society faces “implicitly means that we need to quantify and manage that risk,” explained Simmons. “Insurance helps to mitigate the impact of natural disasters, while insurance-led modeling in risk understanding drives better risk management and response.”

During his speech, Douglas said, “Some people say to me, ‘Why are we involved with poverty reduction?’ I say, ‘It depends on how you look at it.'”

He explained that providing people in developing or emerging countries with insurance against the shocks of major natural disasters is a mechanism for relieving and hopefully alleviating poverty—often multigenerational poverty—from natural disasters. 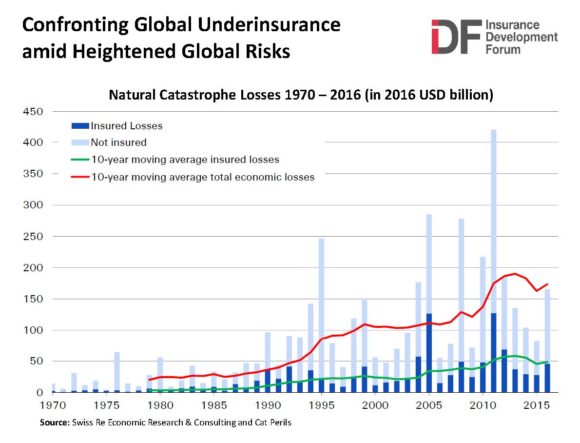