Swedbank AB acknowledged it will no longer be able to live up to its goal of paying out one of the highest dividend ratios in the Nordic finance industry.

Sweden’s oldest bank, which is dealing with the fallout of a money laundering scandal that has left it Europe’s worst performing financial stock this year, said it will now target paying out 50% of profits to shareholders, compared with 75% previously, according to a statement on Wednesday to the Stockholm exchange.

Shares in Swedbank fell as much as 6.6% in the Swedish capital after the report was published, bringing losses this year to about 30%.

Aside from an overall stricter regulatory climate, Swedbank pointed to “uncertainty” in relation to what it described as its “work on anti-money laundering.”

So far the scandal has had a limited effect on customers, with a small number of both retail and corporate clients exiting, Swedbank said. Bond investors haven’t been as nonchalant: The bank has held off from issuing a new type of bail-in-able debt amid wider spreads, and plans not to make its debut until after the summer.

Sweden’s biggest mortgage bank this year became embroiled in a Baltic money laundering scandal that’s already cost the chief executive officer and chairman their jobs. Investigations are under way in Sweden, Estonia and the U.S. and investor concerns about potential fines have wiped out more than a quarter of Swedbank’s market value this year. That’s the worst performance of any major European bank over the period. The only lender that comes close is Danske Bank A/S, which is at the center of a $230 billion Estonian money laundering scandal.

In its second-quarter results, Swedbank said “shortcomings” had been identified as a result of its internal probe into laundering allegations. “An extensive amount of information is being reviewed, covering Swedbank and its global network of branches, as well as relevant wholly owned subsidiaries,” it said. The bank is scrutinizing customers and transactions covering the period 2007 through March 2019, it said.

“Swedbank’s slashed 75% dividend payout to 50% is a sensible, but necessary move, to boost its tight capital buffer of just over $1 billion vs. its 14.6% CET1 requirement. The lender probably faces fines in 2020, yet it’s impossible to estimate the extent, given $150 billion of alleged money-laundering transactions.” —- Philip Richards and Georgi Gunchev, bank analysts

Anders Karlsson, who has been acting CEO since Birgitte Bonnesen was fired at the end of March, said Swedbank’s new dividend policy reflects the fact that the bank is “in a very special situation” that requires it to have a “safety buffer.” He also said it was too early to speculate on how the bank should prepare for a possible laundering fine.

“If there is a fine, when there is a fine, we will pay that fine, and exactly how that will pan out, it is still too early to say,” Karlsson said in an interview with Bloomberg Television. “I think it is important to build a safety buffer, in the environment we are in.” 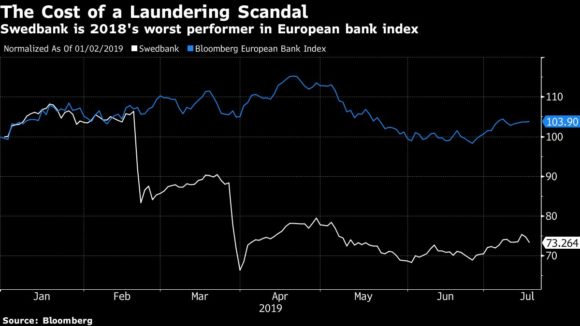 Swedbank, like Danske, is grappling with higher compliance costs as a result of its money laundering scandal, in which it’s alleged the bank may have handled over $100 billion in suspicious transactions. Denmark’s biggest bank, which is due to report second-quarter results on Thursday, last week issued a profit warning in part due to an increase in compliance costs.

The Danish financial regulator last year ordered Danske to hold an extra 10 billion kroner ($1.5 billion) in capital to help deal with the fallout of its laundering scandal. Banks in the Nordic region are also facing tougher capital rules that target internal risk models widely used in the industry.

On Wednesday, Swedbank said it is “well positioned to meet future changes in capital requirements” should they arise. Chairman Goran Persson, who started last month, promised shareholders that Swedbank will continue to be a “well-capitalized, low risk bank” after implementing the new targets.