In the Swiss canton of Zug, officials are going to extremes to avoid getting penalized by the world’s lowest interest rate.

To minimize the amount of cash on hand that would get hit with a charge, Zug’s treasury postponed recouping nearly a billion francs in capital gains tax revenue from the federal government. The canton, or state government, also has plans to pay bills and staff Christmas bonuses early.

According to Zug Finance Director Heinz Taennler, the situation is a “really big pain.” And with the Swiss National Bank’s policy benchmark at an eye-watering -0.75%, and possibly about to go even lower, authorities there may have to get even more radical in their rethink of cash management. 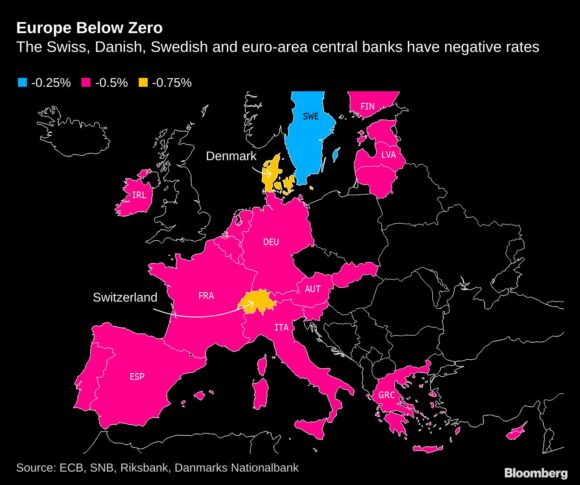 Interest rates are below zero across much of Western Europe, and an economic slowdown means that’s unlikely to change soon. The Swiss government says that in 2020 it won’t pay interest, as it has in the past, on federal income taxes received before their due date owing to the low-yield environment.

The financial industry is up in arms about negative rates, with UBS Group AG Chairman and former Bundesbank chief Axel Weber warning they’ve gotten so low they do more harm than good.

But while banks, economists and central bankers argue about their usefulness, others have to deal with the reality.

To preserve margins, lenders are increasingly passing on negative rates to clients. UBS, Switzerland’s biggest bank, cut the threshold for levying an annual 0.6% on deposits in half to 500,000 euros ($549,000).

That’s got companies on the lookout for alternatives.

Industrial and retail firms, as well as pension funds, are examining the option of parking money in vaults, according to Zurich Insurance, which is dealing with amounts of as much as 500 million francs.

Before it concludes an insurance contract, it inspects a storage site’s walls, door, infrared surveillance and motion detectors. Premiums are a few thousandths of the insured sum, cheaper than the hit from sub-zero interest rates.

Negative central bank interest rates in Switzerland and the euro area were implemented to juice inflation, but also mean highly rated creditors can raise money for free or even get paid to borrow. Yields on Swiss federal 10-year debt are close to -0.8%.

While there have been calls for more fiscal spending to counter the downturn that’s hit much of Europe, authorities in Switzerland are generally sticking to fiscal caution.

The AAA-rated canton of Basel City, home to pharmaceutical giants Roche and Novartis, gets paid to borrow money and rakes in about in about 4 million francs annually from that. The money is used to pay down debt.

“More isn’t being spent,” Basel’s finance chief Sven Michal said. We have a “strategy of long-term fiscal sustainability. That’s not being changed.”

What’s clear is that that with dark clouds drawing over the global economy, another SNB interest-rate cut may lie in store.

Zug managed to pay only 7,000 francs in negative interest last year, but an even lower central bank policy rate could force Taennler ultimately to look at more dramatic options.

“At some point — not today or tomorrow — we’ll have to think about whether we put cash in a safe.”