Providing an annual update of its study of the impact of catastrophic events on global GDP, researchers from the University of Cambridge find that roughly $584 billion could be wiped from the global economy from such events in 2020.

According “Cambridge Global Risk Outlook 2020,” published by The Centre for Risk Studies at the University of Cambridge Judge Business School, the figure represents a 3 percent increase over last year, and 1.55 percent of 2020 GDP.

As was the case in the 2019 report, the top three classes of catastrophe threat types for 2020 are:

As for individual threats within the three broad categories, a financial event tops the list—a market crash potentially putting $106.5 billion of GDP at risk. [Editor’s note: Click on the images below for an expanded view]. 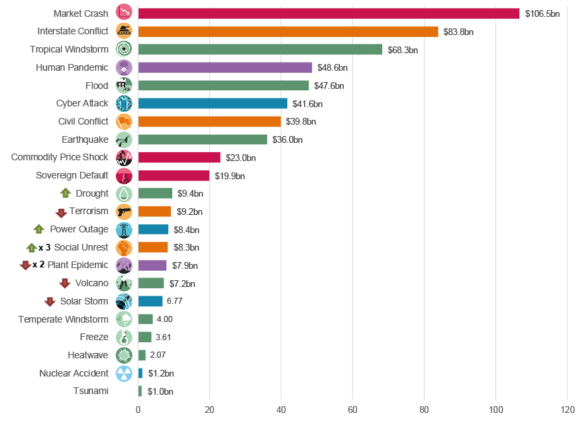 The second biggest individual threat is a geopolitical one—an interstate conflict, putting at $83.8 billion at risk. Tropical windstorm is the third potentially costliest individual threat, with the possibility of such storms wiping out $68.3 billion of global GDP.

“Corporate risk is escalating along with the cadence and ferocity of climate-related catastrophes,” said Andrew Coburn, chief scientist in a statement about the research.

Still, natural catastrophes are high on the risk radar, in spite of the fact that reinsurers saw a year of below-average insurance losses in 2019. “Power outages, like those forced by the Californian wildfires, have also highlighted the ripple effects impacting societies and their ability to manage throughout, and recover from, catastrophic events,” Coburn said, highlighting a technology risk flowing from a nat cat.

While technology risks didn’t rank in the top five individual threats, the report highlighted the growth in GDP at risk from a cyber attack, the sixth-ranked threat. According to the report, a cyber risk is now estimated to put $41.6 billion of GDP at risk—representing 7 percent of total 2020 GDP at risk—up from a previous estimate of $39.7 billion.

To put together the risk rankings and quantify GDP impacts, researchers analyze a probabilistic event set of over 12,000 catastrophe scenarios representing 22 threats, with potential to cause disruption to economic activity in 279 of the world’s most important cities. These cities are responsible for over 41 per cent of the world’s GDP. The consequences of these events are quantified in terms of their “GDP@Risk”—a metric that can be used to compare the different types of threat.

The report also includes a list of the cities most exposed to the various catastrophe threats, ranking Tokyo Japan as the most vulnerable—with nearly $25 billion at risk.

The top five cities by risk exposure are listed below:

According to the report, the appearance of certain cities at the top of the risk list usually indicates two characteristics: a large annual GDP output with the potential for major losses even from unlikely events; and exposure to particular shocks associated with the geography and type of economy of each city.

Interstate conflicts are top risks for Tokyo and Istanbul, while windstorms are the most likely shocks for Manila and Taipei. Market crash is the top risk associated with New York.

Los Angeles is the only city in the top 20 to be most exposed to earthquake risk, ranking as the seventh most-exposed city around the globe.