Moscow has denied targeting the plant and blamed Kyiv for the incidents.

The attacks show “the very real risk of a nuclear disaster that could threaten public health and the environment in Ukraine and beyond,” Rafael Grossi, director general of the International Atomic Energy Agency, said Saturday.

Military action around Zaporizhzhia — which Russia occupied in March but is still operated by Ukrainian workers — “is completely unacceptable and must be avoided at all costs,” Grossi said. “This must stop, and stop now.”

All seven pillars of “indispensable nuclear safety and security” have been breached since the start of Russia’s invasion in February, he said.

Ukrainian President Volodymyr Zelenskiy said Friday that Russian troops had fired at the plant twice, and called for sanctions against Russia’s nuclear industry.

Since then, “we have a significant worsening of the situation around the Zaporizhzhia NPP,” he said Saturday night in a video address. “Russian terrorists have become the first in the world to use a nuclear plant for terror.” On Sunday, Zelenskiy tweeted that he’d discussed the situation with European Council President Charles Michel.

Володимир Зеленський
@ZelenskyyUa
Talked with @eucopresident Charles Michel, told about the situation on the battlefield, in particular at the Zaporizhzhia NPP. Russian nuclear terror requires a stronger response from the international community – sanctions on the Russian nuclear industry and nuclear fuel. (1/2)
Sent via Twitter Web App.
View original tweet.

Russian officials say Ukraine had done the shelling itself. 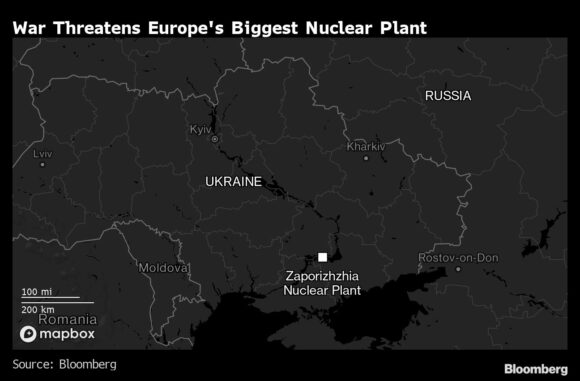 Russia appears to be using its control of the facility “to play on Western fears of a nuclear disaster in Ukraine, likely in an effort to degrade Western will to provide military support to a Ukrainian counteroffensive,” the Institute for the Study of War, US-based military analysts, said in an Aug. 3 report.

In his statement, Grossi said that there had been no damage to the nuclear reactors themselves and no radiological release from Friday’s incident. “However, there is damage elsewhere on the site,” he said.

The IAEA has for four months requested permission to visit the plant, without success, according to Grossi. “This will need the cooperation, understanding and facilitation from both Ukraine and Russia,” he said.

Polyanskiy said Moscow was “open” to an IAEA inspection. “It was the Ukrainian side that was not giving the green light,” he said.