When it comes to the $846 million construction borrowing package being debated at Minnesota’s Capitol, many wonder if it’s it too big to fail.

Or in the case of Gov. Mark Dayton, is too big to veto?

Dayton threw a curveball Monday by saying he’d veto the bill if lawmakers use it to scuttle new rules regarding fire sprinklers in new homes. That building-code clause would require single-family and duplex homes built after January to have built-in sprinklers if they are 4,500 square feet or larger.

Firefighters say it’s a feature that will save lives by extinguishing fires before they rage out of control. Builders argue that there are other now-standard safety features that prove more effective and less costly, such as smoke detectors that are interconnected and egress windows that provide basement escape routes.

Some lawmakers think Dayton, a Democrat, is bluffing with his threat to the Democratic-controlled Legislature on a signature bill that would pay for construction on college campuses, at state prisons, for local wastewater plants and at civic centers throughout Minnesota. 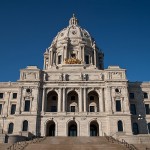 “I think he’s doing this to try to intimidate his own DFL colleagues. It’s absolutely a ridiculous threat,” said Sen. Dave Senjem, the Rochester Republican who has led the push to repeal the sprinkler code. “I don’t think he’s going to take down the bill over sprinklers.”

But talks on a compromise are under way.

“I take him at his word,” said House Speaker Paul Thissen, DFL-Minneapolis. “I’m hopeful that there’s a creative way that we can figure out an alternative on that.”

Dayton has twice vetoed bills that would have prevented the mandate. In letters to lawmakers, he has said that homeowners aren’t the only ones at risk because firefighters who enter sprawling homes can also be in danger.

In February, an administrative law judge let stand the rules developed over the prior 18 months by the Department of Labor and Industry.

Shawn Nelson, president of the Builders Association of the Twin Cities, said the sprinkler requirement could add $2 per square foot to the cost of a new home because of wider pipes and the need for larger wells or other water supplies to support the devices. He said builders could support a requirement that they notify customers that sprinklers are available.

“If people want to put a sprinkler system in, they could,” Nelson said. “It should not be forced on them.”

Nelson noted that most fatal fires occur in older homes, not those built in recent years.

Eden Prairie Fire Chief George Esbensen, legislative chair of the Minnesota Fire Service Coalition, puts the installation cost at $1.30 per square foot. He also said the fatality statistics can be misleading because the majority of the housing stock is comprised of old homes.

He said fires in new homes can burn faster, collapse quicker and emit more toxic smoke because of the supplies used and the composition of newer furnishings.

“Today’s new home is tomorrow’s older home. We’re trying to make the going-forward homes safer,” Esbensen said. “We know what causes deaths in homes. We know how to stop it. We’re not inventing new ways to stop it.”