In court, Segal said he was remorseful but didn’t believe he had done anything wrong.

“I am not a bad person, I have never stolen a dime in my life,” Segal said.

A jury convicted the politically connected Segal in June 2004 of 26 counts of racketeering, fraud, embezzlement and other charges and ordered him to forfeit $30 million – the largest forfeiture verdict ever handed down by a federal jury in Chicago. 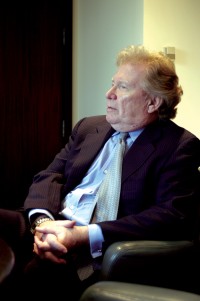 “You just think you’re above the law. Well guess what, no one is untouchable, especially in this town,” U.S. District Judge Ruben Castillo told Segal.

Prosecutors during his two-month trial alleged Segal looted more than $20 million from a premium trust account at his Near North Insurance Brokerage Inc. and used the money to support a lavish lifestyle.

Castillo said he saw two sides to Segal during the trial, one that was “nice, charming and brilliant” but he also saw “evidence of a dark side to Mr. Segal that’s mean-spirted, immoral and unethical.”

During trial, defense attorneys countered that Segal was the victim of dishonest underlings and shoddy accounting, and repeatedly argued that no Near North customer ever lost money.

Segal lamented in court Wednesday that his lawyers did not let him testify during his trial.

Numerous witnesses testified during trial that Segal siphoned money from the restricted account despite warnings that it was illegal to do so. Illinois law requires the firm to keep customers’ payments in the restricted trust account.

Segal has been in the Metropolitan Correctional Center in Chicago since the day after his conviction, after Castillo determined that Segal was a flight risk.

Segal’s sentencing was postponed in June after his attorneys told Castillo that their client’s mental health was deteriorating, preventing him from preparing for his sentencing. The judge ruled last month that Segal was fit to appear for his sentencing hearing, based on an evaluation by medical experts.

Near North Insurance Brokerage also was convicted of 11 counts of mail fraud, seven of making false statements and three of embezzlement.