Don’t be alarmed, but there are convicted criminals roaming around the country acting as insurance producers. They could be drunk drivers, robbers, forgers, possibly even rapists.

They got their producer licenses in states that did not ask them for their fingerprints.

OK, it’s not really as scary as that sounds but it is true that more states do not require complete criminal checks involving fingerprinting on insurance producers than do. Only 17 states (see map) currently require producers to submit fingerprints to obtain their insurance license, according to the organization of state insurance regulators, the National Association of Insurance Commissioners (NAIC).

More than 30 state insurance regulators are not authorized by their legislatures to obtain fingerprints. They still perform criminal background checks but they are not the more extensive ones that can be obtained using fingerprints.

States that collect fingerprints use them to electronically obtain background reports from state or federal databases, or both, depending on their authorization. These crime reports are more thorough than what regulators can obtain using just social security numbers, dates of birth or other information. For instance, fingerprints are required for an FBI search.

The states that use fingerprinting say that it makes a difference. In a recent Insurance Journal survey of 26 state insurance departments, each of the 11 states participating that use fingerprinting reported that the tool has definitely helped them identify producer hopefuls who have served prison time or had notable run-ins with the law.

Someone who has committed a felony probably wouldn’t be shy about lying on a licensing application. Indeed, states find that the more extensive background reports turn up all sorts of crimes and misdemeanors that applicants forgot they had committed, mistakenly assumed had been removed from their record, or believed were too minor to have to report.

“We regularly discover information that applicants have omitted from their applications,” reported Gayle Woods, operations manager for Oregon’s insurance department.

“[M]any times we have found prior criminal history that had not been disclosed. Some individuals believe criminal history falls off after seven years, or that if they get their convictions expunged they are un-reportable, which is incorrect,” said Arizona’s insurance licensing administrator, Steven Fromholtz.

“We have found that several candidates think that certain crimes/felonies fall off of their record after a certain amount of time, and this is not the case,” Pam Daugherty, Montana’s insurance licensing supervisor, said in another response to Insurance Journal’s survey.

“The most obvious case I had was one where I denied an individual that had several felony convictions and answered ‘no’ to the question about criminal history. Seven states that do not do fingerprinting requested information on our denial since he was licensed in their jurisdiction,” said Jim Genetti, Idaho Insurance Bureau, chief of Consumer Affairs.

Genetti also told about a convicted embezzler who denied any criminal history on his license application. The FBI check discovered he had just been released from prison.

The experience with fingerprinting in Texas has been very revealing. Matt Ray, deputy commissioner in the licensing division at the Texas Insurance Department, claims that 19 percent of applicants for producer licenses have a criminal history, either state or federal. What’s more, an average of 30 percent of applicants answer background questions incorrectly and fail to disclose their criminal history, according to Ray.

“Even if they answer the question correctly, the fingerprint criminal history reports — state and national– reveal the entire criminal history with sufficient detail to allow obtaining criminal history documents and to analyze the nature and significance of the crime,” Ray said.

Ohio has had similar experience.

“There have been many cases where the department could have issued a license to an applicant just based on the information provided on the application. But then the criminal background check result arrives and it is revealed that that applicant did not disclose the entire conviction history either in part or in whole,” reported Karen Vourvopoulos, licensing chief for the Ohio Department of Insurance.

New Mexico officials told Insurance Journal that applicants with histories of rape, child abuse and forgery have been blocked from entering the business thanks to fingerprints.

In addition to catching criminals with amnesia about their past, experts suggest that fingerprinting also acts as a deterrent– keeping them from applying in the first place.

In Pennsylvania, officials report that the license retention rate has soared since fingerprinting went into effect. “We believe candidates are more invested in the market and come with higher credentials, traits that better serve the market and consumers,” said Ron Gallagher, deputy insurance commissioner in the Keystone State.

Fingerprinting has worked to assist rather than deny a few applicants also.

“There is also a positive outcome that can take place from receiving a background check report. There have also been several occasions where an applicant has answered ‘yes’ on the license application and the background check result verifies that the applicant was truthful and the incident resulting in the criminal history result was within the state’s guidelines that would allow issuance of the license without further documentation from the applicant,” Ohio’s Vourvopoulos recalled.

Most states that require fingerprinting now do so for resident producers only. However, California, Florida and Washington also require it of all non-resident applicants.

Some key states, including New York, Louisiana, Wisconsin, Illinois, Michigan, Kentucky, Mississippi, Virginia, Maryland and Massachusetts have not implemented fingerprinting. Most — 23 out of 26– states in the Insurance Journal survey, whether they fingerprint now or not, said they wish all states did it.

The District of Columbia recently passed legislation and its department reports it is close to implementing fingerprinting. West Virginia is waiting on the state police to complete an upgrade of the electronic system before starting its fingerprinting checks. North Carolina Deputy Commissioner Etta Maynard thinks legislation filed there will pass in 2010. South Carolina expects legislation to be considered in 2010 also.

According to the Insurance Journal survey, states that do not now fingerprint support the idea but they have had other things to worry about or have run into obstacles trying to get the legislation needed to implement it.

“We strongly agree with the need for fingerprinting. We currently do a background search on each new resident applicant but feel that fingerprinting would provide a better search,” commented Fred Stiffler, director of producer licensing in Arkansas.

“This is not an issue on which we have taken a strong position in the General Assembly. There is considerable opposition from the industry. In the face of that opposition, favorable action is unlikely,” stated a Maryland insurance department representative.

States that have encountered obstacles to getting needed legislation or authorization cite a lack of support from some in the insurance producer and insurer community for specific provisions, a concern over cost of implementation, and a focus on other regulatory priorities.

In a March report, the NAIC, which has for years worked to get all states on board with fingerprinting resident applicants and conducting state and federal criminal background checks, found that “the primary barrier to this legislative change is lack of support from the state and local industry organizations.” The reasons for opposition to the legislation “seem to focus on generalized privacy concerns, perceived lack of need and uncertainty about applicability to existing producers.”

Producers maintain that they actually support criminal background checks but that they want it done right as part of more sensible and streamlined overall licensing system. Increasingly, they have come to believe that this can’t be done right by the states.

What rile agents and others in the industry are the duplication and lack of reciprocity and uniformity of the overall licensing system of which fingerprinting discrepancies are just a part. According to Charles Symington, senior vice president for government affairs for the Independent Insurance Agents and Brokers of America (IIABA), the average independent agency today writes in at least eight states and it is not uncommon for medium to large agencies to be licensed in 35 to 50 jurisdictions. To the extent states are not reciprocal or uniform in their requirements, this means an agency or insurer has to comply with multiple sets of rules. They would prefer simplified, one-stop shopping for licensing.

“Many state-level bills that purport to establish background checks for agents would actually have the effect of making the licensing process more cumbersome and less uniform,” said Symington. “Also, many of these bills fail to institute a once-and-done process, do not provide necessary privacy protections for producers, and impose significant new costs and burdens on agents.”

According to the GAO study, the fact that states are not on the same page on fingerprinting is one of the key challenges that continue to undermine true reciprocity and uniformity, something that has been a goal of Congress, NAIC, states, and the industry since at least 1999 when Gramm Leach Bliley was enacted in part to encourage a more modern and efficient process.

The lack of full licensing reciprocity is not for lack of trying by the NAIC. The NAIC has produced modernization plans that call for full implementation of an electronic fingerprint system as part of the licensing process. The NAIC has repeatedly urged Congress and the states to pass legislation to give insurance commissioners the authority to conduct criminal checks using fingerprints.

Most (47) states have adopted the Producer Licensing Model Act that grew out of the NAIC’s modernization plans. But a few jurisdictions — California, New York, Florida, Washington and Puerto Rico– have not fallen in line and one of the reasons is that some of them perform background checks using fingerprints but refuse to reciprocate with the states that do not out of concern that doing so might compromise their producer pool, according to the GAO.

For some, the continuing gap among states over fingerprinting is a good example of why a federal regulatory role in insurance — even if restricted to just licensing issues– makes sense.

Independent agents and brokers are among those that have run out of patience with states over the broader issue of producer licensing and are looking to Congress for a solution. That’s right– independent agents– those staunch defenders of state regulation and opponents of a federal charter– think a national approach is the best answer for resolving licensing conflicts for multi-state producers.

That’s the idea behind the federal bill (HR 2554), the National Association of Registered Agents and Brokers Reform Act of 2009, or NARAB II as it is known, which was reintroduced this year by Rep. David Scott, D-Ga., and Rep. Randy Neugebauer, R-Texas. Similar legislation passed the full House in September 2008 but never attained a Senate vote.

If the legislation passes, producers would be able to join a national organization, NARAB, which would be responsible for establishing one set of licensing, continuing education and other producer qualification standards that would be applicable in all states in which they do business.

And, according to Symington, NARAB would address the fingerprinting problem. An agent or broker would have to complete a criminal background check in order to become a NARAB member, “and the bill includes language to protect an agent’s privacy in relation to fingerprinting.”

The GAO also found that a number of state and industry officials believe that further progress on meaningful coordination among states on licensing and fingerprinting is unlikely without Congress stepping in to grant states the authority they need. The GAO recommended that Congress take hold of the issue.

Symington agrees. “We are unlikely to ever have true licensing reciprocity without additional federal action,” he said. 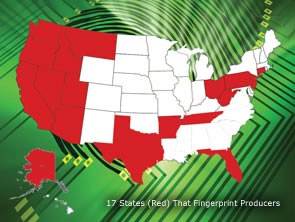