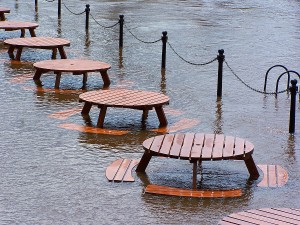 As many property owners continue to recover from hurricane and tropical storms Irene and Lee and new storms form offshore, the U.S. Senate is taking steps to renew the federal flood insurance program.

Today, the Senate Committee on Banking and Urban Affairs passed its version of a bill to reauthorize and reform the financing of the National Flood Insurance Program (NFIP). The NFIP — which is $18 billion in debt largely as a result of claims from Hurricane Katrina — is set to expire at the end of the month unless Congress acts.

The legislation — called the Flood Insurance Reform and Modernization Act — would reform parts of the NFIP and extend it for five years. The bill now goes to the full Senate for consideration.

Both measures would move the program toward sounder financial operations and require that premiums be raised to levels actuaries say reflect the true risk of flooding. Many homeowners now pay subsidized rates.

The Senate proposal would reauthorize the NFIP though 2016 and forgive its $18 billion debt. It would also permit rates to rise by 15 percent a year in order to reach their actuarially-indicate levels that reflect the true risk of flooding. Currently, rates can’t go up more than 10 percent a year. The program would be required to build up and maintain a reserve fund.

The Senate version would also allow for a transition for properties newly mapped into a flood zone, and calls for studies to examine other ways to modernize the program.

The House version similarly tries to get to actuarially sound rates but would let rates go up as much as 20 percent a year. It does not, however, forgive the NFIP’s debt as the Senate proposal would do.

The House version would make business interruption and additional living expense coverages available under the NFIP as optional coverages, while the Senate stops short of approving this expansion and calls for a study instead.

Once the Senate passes its legislation the House and the Senate will have to come to a compromise soon to renew the program by the end of the month. The program has been renewed for short-term periods for several years.

‘This program, which provides over $1.2 trillion in coverage, needs certainty. It is my hope to provide this through a long-term extension, ‘Sen. Tim Johnson (D., S.D.), chair of the Senate Banking Committee, said prior to hearings in June.

U.S. Representative Judy Biggert (R., Ill.), chairman of the House Financial Services Subcommittee on Insurance, Housing, and Community Opportunity, feels confident the House and Senate will reach a compromise on the two versions.

“Reaching a consensus on this legislation before the NFIP expires at the end of the month is absolutely vital, especially during hurricane season,” Biggert says. “The House and Senate versions of this bill include far more areas of agreement than disagreement, and I’m confident that we can work out a compromise. … The NFIP is too important to let lapse, and too in debt to continue without reform.”

Insurance industry and real estate interests are among those urging Congress to renew the program.

“A five year extension is of the utmost importance, as are reforms to put the program on sound financial footing,’ says Charles Symington, Independent Insurance Agents & Brokers of America (Big ‘I’), senior vice president of government affairs. ‘The Big ‘I’ strongly supports efforts to extend and improve the NFIP and we urge the full Senate to take up this legislation as soon as possible to avoid the program’s looming expiration on September 30.”

The Senate’s ‘Flood Insurance Reform and Modernization Act’ must still be considered on the full Senate floor, and at this time that consideration has yet to be scheduled.

During a lapse in the program, insurers who participate in the NFIP are required to continue paying claims with the expectation of reimbursement once the program is reauthorized. While this serves to protect existing policyholders, no new coverage can be written during an NFIP hiatus. Since many lenders require coverage to obtain a mortgage on a property in a floodplain, a lapse in the NFIP can make buying or selling a home far more difficult.

“With just a few weeks remaining before the NFIP’s September 30 expiration date, there’s no time to lose,” said Jimi Grande, senior vice president of federal and political affairs for National Association of Mutual Insurance Cos. (NAMIC). “Congress must act swiftly to ensure that the program is maintained and avoid any uncertainty that could affect our economy.”

Tom Santos, vice president for Federal Affairs at the American Insurance Association (AIA), issued a statement today following the Senate Banking Committee’s passage of the Flood Insurance Reform and Modernization Act of 2011. The bill was reported out by a voice vote and now moves to the full Senate for consideration.

‘AIA and its member companies commend the Senate Banking Committee for passing a NFIP reform and reauthorization bill out of committee that contains a long-term extension and makes necessary reforms to the program that will put it on a path toward a more sound financial footing and provide the ability to charge risk-based premiums.

While the bill includes a number of improvements, Tom Santos, vice president for Federal Affairs at the American Insurance Association (AIA), says he hopes the Senate will clarify a few items in the bill. Even so, the bill’s reform provisions will put the NFIP on a path toward a more sound financial footing and provide the ability to charge risk-based premiums, he says. The timing is critical, he adds.

“Given the inclement weather and severe flooding throughout the country, it is especially critical that this program be reauthorized and extended so that no home or business is without the ability to receive coverage,” Santos says. “With more than 5.6 million policy holders dependent upon the NFIP for their protection against floods, we hope the full Senate will now move to enact these important reforms.’

“We are now closer to achieving a long term reform and extension bill than at any point in recent memory and we are hopeful that the House and Senate will finally push this over the finish line,” Symington says.