The United States bore the brunt, about $119 billion, of that total economic hit, and private and public insurance picked up the tab for more than half of that damage in the U.S.

The large-scale weather events in the U.S. pushed the global total of insured weather-related claims for the year to $77 billion, the third most expensive on record. This amount is significantly lower than 2011, when record earthquakes and flooding in Asia Pacific caused historic insured losses of more than $126 billion, the highest ever recorded, Swiss Re reported.

Nine of the 10 most expensive insured loss events happened in the U.S. in 2012. The high insurance penetration in North America meant that $65 billion, over half of the $119 billion in economic losses in the region, were covered by private and public insurance. 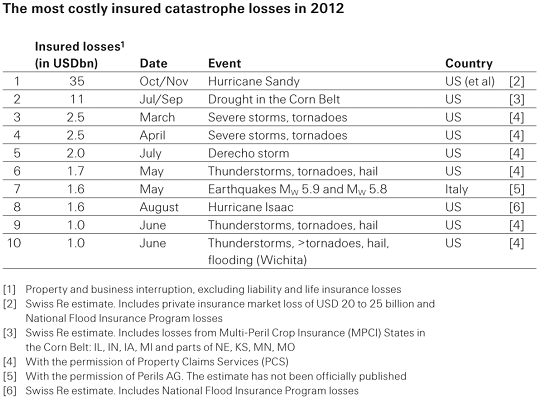 “The severe weather-related events in the U.S. provided a reminder of the value of insurance and the vital role it plays in helping individuals, communities and businesses to recover from the devastating effects of catastrophes,” said Kurt Karl, Swiss Re’s chief economist. “However, large parts of the globe that are prone to weather extremes were not able to rely on financial relief due to low insurance penetration.”

Hurricane Sandy was the most expensive event for the year both in terms of economic and insured losses. The Hurricane caused an estimated total of $70 billion in economic losses, making it the second most damaging hurricane on record after Hurricane Katrina in 2005. Insured losses were approximately $35 billion, out of which $20 to $25 billion were covered by the private insurance market. The remaining insured losses were incurred by the federal government’s National Flood Insurance Program (NFIP).

According to Swiss Re, Sandy’s losses stemmed from the largest ever wind span recorded for a North Atlantic hurricane, and from the ensuing massive storm surge that caused damaging flooding in a densely populated area on the East Coast of the U.S. It also led to the worst power outage caused by a natural catastrophe in the history of the U.S. Hurricane Sandy also struck the Caribbean and stretched as far north as Canada, thereby adding to the loss of lives and property.

“Sandy challenged the industry with its combination of record wind field and storm surge,” said Matthias Weber, Swiss Re’s Group chief underwriting officer. “The possibility that such events could increase in frequency and strike densely populated regions such as the northeast U.S. means that extreme storm-surges need to be more thoroughly understood.”

A simulation exercise presented in Swiss Re’s sigma study shows how an increase of sea levels of 10 inches (0.25 metres) by 2050, will almost double the probability of extreme flood losses occurring. For the industry, this means that a $20 billion insured loss event, now expected once in 250 years, would be expected once in 140 years.

Record heat and extremely dry weather conditions in the U.S. led to one of the worst droughts in recent decades, affecting more than half of the country. Severe crop failures in the U.S. Corn Belt resulted in insured agricultural losses of $11 billion, including pay-outs from the federal Multi-Peril Crop Insurance (MPCI) assistance program. This makes the 2012 drought the highest ever recorded loss in agriculture insurance, according to Swiss Re.

“The record drought in the bread basket of the U.S. highlighted the economic importance of insurance, supporting the economic survival of thousands of farmers,” the report says.

A rare and relatively weak series of earthquake shocks in the north of Italy caused insured losses in excess of $1.6 billion, the highest ever recorded in the country. The total economic loss for these earthquakes was $16 billion.

“Although substantial, insured claims were only a fraction of the total cost of the event. Italy, a country with multiple seismic sources, has one of the lowest earthquake insurance penetration rates among industrialized countries with high exposure to earthquake risk,” Balz Grollimund, Swiss Re’s head of earthquake risk, said.