America’s European allies are being hypocritical in their complaints about the U.S. spying on them because they all have their own surveillance programs, according to two former top officials in the Clinton Administration.

Former Secretary of State Madeleine Albright said she was surprised by the “hypocrisy” from Germany and other allies and former Secretary of Defense William Cohen agreed, calling the Europeans’ outrage “stunning.” 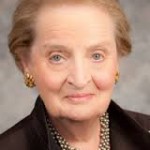 “I was surprised the Europeans were so surprised,” Cohen said. “This is stunning to me.”

The National Security Agency (NSA) has also said that the millions of French, Spanish and Italian phone records reported as swept up by the NSA were in fact collected by the European countries’ own spy operations and not by the U.S.

Albright and Cohen, who served together from 1997 to 2001, participated in a wide-ranging discussion of global risks at the Professional Liability Underwriting Society (PLUS) International Conference in Orlando.

Karen Hughes, former Bush Administration communications advisor and Under Secretary of State for Public Diplomacy and Public Affairs, now an executive with public relations firm Burson-Marsteller, served as moderator of the PLUS panel.

Albright, a Democrat, and Cohen, a Republican, agreed on what some of the main risks facing the world are today, citing among them in no particular order: terrorism, nuclear proliferation, income inequality, energy, climate change, pandemic disease, cyber threats, a lack of respect for democracy and figuring out how to deal with non-state actors and not just governments.

Cohen added another risk. “The greatest threat to our national security is our national debt,” he said, quoting Admiral Mike Mullen, retired chairman of Joint Chiefs of Staff.

“The debt is so important because it is driving everything else” and causing the U.S. to be seen less favorably around the world, Cohen said.

Cohen, who also served in the House and the Senate for Maine, criticized the inability of Congress to come together on a compromise to solve the debt and resorting instead to the sequester that makes indiscriminate cuts in domestic and military budgets.

Cohen said the sequester is not only hurting good domestic programs but also weakening national security as it is grounding airplanes, leaving ships unrepaired and causing other countries to look at the U.S. with dismay.

“The danger is the sequester may become the new normal,” he said. “It’s irresponsible, irrational and dangerous.”

Albright agreed the gridlock in Washington has “undermined” the country’s standing abroad and, she said, this also makes it difficult for the U.S. to deal with some of the other risks.

She said a difference between the national debt and other major risks is that the country does not need the cooperation of other countries to solve the debt crisis. “It is the only risk the U.S. can solve alone,” she said, “and it is outrageous that we have not been able to do it.”

Cohen said the paralysis in Washington does not reflect the views of American people, who he said are not as divided as the extremes of the political parties.

“The American people are exasperated and that has to be given a voice, particularly by the business community because we have some about to sacrifice our credit rating, saying it doesn’t matter if we don’t pay our bills,” he said. “I am astonished at this.”

“People are fed up with this,” Albright said.

The two former Clinton Cabinet officers agreed that the Middle East is more volatile than it has been in a long time given the situations in Egypt and Syria, a resurgence of Al-Qaeda in Iraq, and the continuing tensions between the Israelis and Palestinians.

Cohen said while the U.S. might not have been able to prevent the ouster of former Egyptian President Hosni Mubarak, it should have given Mubarak a “more graceful exit” because he was a U.S. friend for 30 years. He contrasted this with how Russian has stood by Syria despite the civil war and thousands of deaths. “The U.S. doesn’t look like a country to be relied on and as a result we have less influence,” Cohen said.

Cohen also said he was “dismayed” over President Obama’s handling of the Syrian situation in which he raised expectations then let them be dashed. He said Obama did this first by proclaiming two years ago that President Bashar al-Assad had to go and then not doing anything to back up that stance, and then when drawing a red line over the use of chemical weapons but backing down on that military threat.

“The way this issue has been handled has had a major impact. Nobody trusts us,” Cohen said.

Albright agreed with Cohen that the Syrian consequences are serious in the Middle East but said Obama is dealing with an American public that is tired of war after Afghanistan and Iraq and wants nothing to do with Syria. She said she believes the international community has a role in Syria.

The two agreed that if Iran is permitted to have a nuclear weapon, the result could be proliferation of nuclear devices throughout the Middle East, including among some non-state organizations such as Al-Qaeda.

Hughes steered the discussion to surveillance and privacy and asked if it is right for the government to violate the rights of millions in order to catch hundreds that may pose a risk. She cited a criticism by Google Executive Chairman Eric Schmidt that NSA spying on its data centers is “outrageous” if it is true. The Washington Post reported that the NSA had tapped into Google’s and Yahoo’s data centers. The NSA has said the report in not true.

Albright said that William Snowden, the man responsible for security leaks that are exposing foreign spying activities, is no hero. “William Snowden is a traitor because he had other ways of being a whistleblower without making such an unbelievable mess with our diplomatic relations,” she said.

Albright said the nation “needs to have a public discussion” about privacy and surveillance. “There is always some new technology,” she said, so the question is how people adjust to it. The current debate over NSA activities, however, is about more than the limits of technology; it’s also about the distrust of government generally, she said.

“There aren’t any zones of privacy left frankly,” Cohen said, ridiculing the notion that Google should be seen as a protector of anyone’s privacy. “What has Google done for your privacy?”

The former defense secretary suggested that the NSA “should have been targeting Snowden and not Merkel,” referring to German Chancellor Angela Merkel, who complained to President Obama about U.S. eavesdropping on her cell phone.

The two former Washington insiders noted how evolving communications technology and the speed information travels are making it difficult for governments to operate.

“Not everyone agrees on everything and it takes time to develop policy,” she said, suggesting that the speed with which information travels often puts pressure on decision-makers to act quickly.

Cohen said there should be limits on surveillance but cautioned that privacy legislation may never be able to keep up with fast-changing technology.

He also expressed a deeper concern about the effects of technology.

“Is governance even possible today given the democratization of information?” he asked. “You can start a revolution in Twitter.”

He said “everybody feels they have a right to speak, and they do, but not everyone has the right to assume their information is correct,” adding that having everyone pushing a special interest makes it “increasingly difficult for any country, especially a democracy” to reach a consensus or unite on major issues.

“What we have is information now being spread without filters,” Cohen said. “Just as you can have a flowing river of clean water, you can have a sewer out there, too.”

At the same time that democracies are under pressure, Cohen said, China “is trying to control information but finding it difficult to do” in a country of 1.2 billion people.

“Information is power,” said Albright, agreeing that technology has a “great democratizing” aspect but that it does not assure democracy.

“How to you get from Tahrir Square to governance?” she asked.