After a catastrophe hits, mobile units filled with adjusters are on site to evaluate property damage. Flash forward five years and an insured may never meet the property adjuster handling his or her claim. Instead, a drone is sent to evaluate damage within hours of it occurring. Claims are closed at breakneck speed as adjusters handle a much higher volume. Insurers see fewer workers’ compensation claims as adjusters remain safely ensconced in their cubicles. 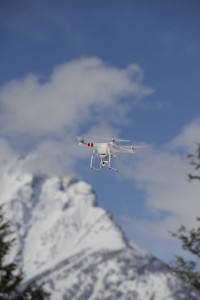 While this scenario may seem too futuristic to imagine, according to industry experts it’s a very real possibility that insurers will be using drones in a number of ways within a few years.

Currently in the U.S., drones are used to enhance public safety, support agriculture, help the environment, monitor the climate and mitigate and monitor disasters. That’s according to the Association of Unmanned Vehicle Systems International (AUVSI), an industry group that has been lobbying the FAA to make changes to its regulations to free up air space for unmanned vehicles and allow for greater government and commercial uses of drones. Internationally, drones are used by several countries to assist in law enforcement and help monitor weather and disasters.

Grant Goldsmith is president of Overwatch, a provider of high risk insurance for international contractors that is a division ofAvalon Risk Management, a managing general agent and a logistics risk insurer.

Goldsmith said he has already been approached by insurersinterested in using drones for claims work. He said an ex‑military person now employed within the claims department suggested the use of drones, after the carrier became overwhelmed with Superstorm Sandy claims.

Jason Wolf, a property defense attorney and shareholder at the Fla.-based firm of Koch Parafinczuk & Wolf, sees drones being used for aerial surveys of property damage to insured roofs. 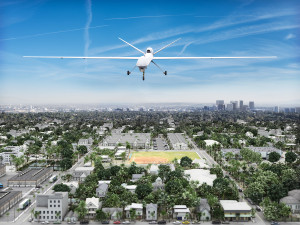 “You get to see everything. You may not even need to go up on the roof. You can see every single inch of the entire property, just with the touch of a few buttons,” Wolf said.

He also expects drones to be used by insurers after a catastrophe.

“I envision a time when, after a catastrophe, an adjuster pulls up to a neighborhood and opens the trunk of his car and presses a few buttons on his tablet device and the drone does an immediate survey of everything and streams it all right to his tablet device, and he knows exactly where to go first and what’s most significant…within minutes. Costing very little money, the insurance company has a sense of everything that needs to be done in a very short amount of time,” Wolf said.

As far as who will operate the drones, Wolf said adjusters will likely see their skills expanded again.

“I think it raises a good point about how adjusters’ skill sets have had to change over the years…from the days when they did everything by hand to when they had to learn how to use a laptop and so on and learn how to use computer estimating programs. I would think they would have to be well‑versed in using drones. I honestly think that the technology is going to be so simple that anyone will be able to do it, maybe once you do your Xactimate class and Xactimate certification for a day, and then you spend a half‑day doing your drone adjusting certification,” the property insurance defense attorney said.

Goldsmith, on the other hand, thinks there will be separate, experienced drone operators.

“In the companies that I’ve talked to that are thinking about introducing a drone into their claims process, that idea is coming forward many times from an ex‑military person who has firsthand experience operating a drone or using a drone overseas,” Goldsmith said.

While drones could be used in a variety of claims and underwriting functions, there are potential privacy and legal issues that haven’t been sorted out yet.

“One of the biggest concerns that people toss out there is privacy concerns. I’m speaking generally about drone usage. Well, that’s not a concern here,” Wolf said. “You’re going to have the drone survey, take a look at the entire house and record the video for you or allow you to look at it in real time. What’s the privacy concern there?”

Related : Policing the ‘Dark Side’ of Internet of Things

Goldsmith thinks the privacy issue has already been addressed within the commercial aircraft industry. 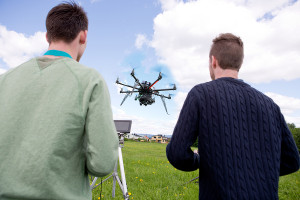 “We hang this whole thing on privacy, but to me, I think the privacy issues have long been decided with commercial aircraft. Small private aircraft or helicopters, it’s pretty well documented that if you’re doing something in your backyard that is still within public view of a passing‑by aircraft, you don’t have a reasonable expectation of privacy, and that’s been upheld through Supreme Court rulings for a number of years,” Goldsmith said.

An invasion of privacy could just as easily occur with an onsite visit by a field adjuster.

“If they’re looking at the exterior and they happen to peer in the window and see some sort of activity that could be construed as a privacy intrusion, I don’t know how different that is than the adjuster being there when the homeowner or the property owner is at work and whoever’s home is not answering the door,” Wolf said. “I think a lot of that is really just overblown, as long as there’s notice given and the insured knows what is going on.”

Both expect there will be a testing period for insurers to sort out issues and concerns.

“Obviously, there needs to be some sort of testing, a beta‑testing period, and you need to get buy‑in from not just the adjusters but from the C‑suite, so to speak,” Wolf said.

While property damage and bodily injury claims could occur from a drone while in use, experts said it isn’t much different than an adjuster driving to a property inspection.

“To the extent that two drones collide, I mean, I see that being no different than two cars colliding. Someone’s at fault, and there may be collateral damage, so to speak,” the Florida attorney said.

Goldsmith said the risk of a collision is small.

“When you’re talking about operating something hand‑held, within line of sight, that they’re in control of on a blue‑sky‑weather day that’s not really larger than a model aircraft and it’s not going beyond their line of sight for hours and hours, they see that as very small risk.” he said.

The Federal Aviation Administration (FAA) has testing sites where a drone can be flown with FAA approval, either for development or training purposes.

The drone testing sites are based in Alaska, Nevada, New York, North Dakota, Texas and Virginia. Additional states where testing may occur include Hawaii, Oregon and New Jersey.

“I think really, for the insurance industry, that the next logical step is to develop a platform of how you would want to use an unmanned system, let’s say, in claims, and then put that thesis of use to practical, operational practice in one of these FAA operations centers,” Goldsmith said.

He recommended interested insurers make contact with an FAA testing site to flesh out best practices and weather conditions for drone usage.

“The testing sites right now are not real busy and are looking for customers,” Goldsmith said.

Insurers contacted for this article declined to discuss whether they plan to use drones in their operations in the future.

Whether a company could operate drones for business now is up for debate.

“If you asked me today whether or not it is illegal or against the FAA’s rules to take an unmanned system out and shoot aerial photography of somebody’s roof or a loss adjustment below 400 feet, I don’t know that I think that’s illegal. I don’t know that I think the FAA is going to come down on you for that. I think you could do it today,” said Goldsmith. “If you’re using it for your own purposes, as a company or as a private individual, and you’re not out as a vendor essentially flying services for a fee, I don’t think you’re in violation of the FAA’s ruling that you are operating it under a service‑for‑fee agreement and so that’s not authorized. I never say “illegal” because there’s technically not a law that says you can’t do it. There’s just a rule that says you shouldn’t do it.”

According to the FAA website, no approval is needed to fly a model aircraft under 400 feet though it is noted that model aircraft flights are not for business purposes.

“The bottom line is you can’t get this genie back in the bottle. There are plenty of people operating drones on a pseudo‑authorized and unauthorized basis now,” Goldsmith said.

“Could drones ever replace humans? Could a drone come out to an auto accident and be dispatched from a central headquarters? That’s a little bit pie‑in‑the‑sky, no pun intended. Automation has replaced a lot of human functions. I think it’s exciting to see what’s going to happen and to see this play out,” Wolf said.

Johnson is editor of ClaimsJournal.com, a Wells Media Group publication.

Surfside Condo Families and Survivors Reach $1B Settlement with Insurers, Others