The auto insurance comparison website Google Compare is expanding into Texas, Illinois and Pennsylvania, as well as adding ratings and insurance agent support.

That announcement was made Tuesday by Stephanie Cuthbertson, group product manager for Google Compare, at Google’s annual AdWords Performance Summit, which was broadcast via livestream.

“Based on the user feedback we’ve received in California, I’m excited to share that drivers in Texas, Illinois, and Pennsylvania will soon be able to quickly find and compare customized quotes, which includes both price and rating for quoted insurers,” Cuthbertson said during a conference talk that Insurance Journal obtained in transcript form.

According to Cuthbertson, “millions of people have used Google to find quotes” since Google Compare launched in California in March. She also said more than half the site’s users say they’ve received a quote cheaper than their existing policy. 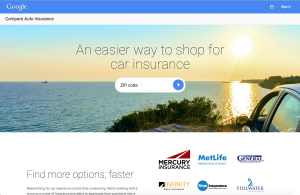 “To provide drivers with more, relevant information as they compare, we’re introducing ratings for each insurer,” Cuthbertson said. “With a tap of your finger, you can drill in to see ratings for things like customer service, claims satisfaction, and whether other users recommend the insurer.”

Beyond that addition to Google Compare was another revelation from Cuthbertson, who said research shows that many users find it helpful to discuss their purchase with a local agent.

“Now when comparing insurers, you’ll have the ability to buy online or call a local agent to get help with your policy,” she said. “This includes support for insurers’ own agent networks, and independent agents.”

A Google spokesman said the company wasn’t offering comments or details. Neither are any of the company’s partners, according to the spokesman.

Compare.com CEO Andrew Rose, who was not immediately available to comment for this article, has been bullish on the partnership.

He has stated it’s his belief that online insurance comparison offerings will go beyond auto insurance and will be available for commercial insurance buyers as soon as 2016 or 2017.

Compare.com, which launched in March 2013 with only three insurance carriers, announced last week it has added its 50th carrier to its insurance panel.

Groups like the Independent Insurance Agents & Brokers of America Inc. and the Insurance Information Institute usually temper such enthusiastic announcements as this one with an industry perspective.

Michael Barry, I.I.I.’s vice president of media relations, said that when word first began to spread about Google Compare the sense was the new service would hurt agents. But it appears that’s not the case.

“Their willingness to incorporate agents into the product is also an acknowledgement that agents play an important role in the process for many drivers,” Barry said. “This kind of dovetails with what we’ve found in various studies, which show that while the process of shopping for auto insurance often starts on the web, often it leads to a meeting with an agent.”

The IIABA wasn’t immediately available for comment, but the group in the past has dismissed the notion that all lines of insurance can be easily commoditized, and it has maintained that what Google is doing isn’t much different than operations like Progressive Direct, GEICO, Esurance, Nerd Wallet, Quote Wizard and Bank Rate.

“Most of the marketing for these kinds of websites is based allegedly on low-cost and convenience,” IIABA Virtual University Director Bill Wilson said in a past interview.

Many online comparison sites claim to offer an insurance quote in minutes. But Wilson asked: “How can you really help a consumer identify their exposures to loss and match it with the right customized product for those exposures” in minutes?

That’s why he believes that when it comes to online comparison tools like Google Compare, consumers will ultimately be on the losing end.

“Consumers are being duped into believing that all of these policies and the service providers are exactly the same,” he said. “The only difference is price.”

Google also announced it is adding mortgages to its comparison tool via an AdWords blog posted on Tuesday:

“Buying a home is one of the biggest financial decisions in life, so understanding your options and having the right tools is critical. The newest addition to Google Compare in the US is coming soon: mortgages. Whether someone is a first-time home-buyer or looking to refinance, consumers will soon be able to find the latest mortgage rates from multiple mortgage providers, and review a customized set of criteria like interest rate, terms of the loan and fees. They’ll be able to apply directly with an approved lender or speak to a qualified adviser for more information, directly from the Google search ad.”

During the annual conference Google focused on improving mobile experiences and offering better marketing tool measurements. At the conference Google also made it known that mobile searches have now surpassed desktop searches on Google in 10 countries, including the U.S. and Japan.

When Google Compare was announced in March, the Mountain View, Calif.-based tech giant hailed it as a “seamless, intuitive experience,” and promised an “apples-to-apples comparison of other providers all in as little as 5 minutes.”

The comparison tool has a relatively simple portal, including a list of major carriers that have signed on as partners. Punch in a ZIP code and hit enter, and that brings visitors to a form for basic information, like name and date of birth. The site also offers visitors a choice to “speed things up” via an autofill feature. This may be particularly convenient for those who are signed into Google’s Chrome browser. Their information is easily filled in and saved as they go along filling out the form.

At the time of the announcement it had already been much anticipated. However, the forehand knowledge that Google was jumping into the insurance game didn’t stop some from fretting about the future of how insurance will be distributed.

Google’s hand in mapping the globe via satellite and providing that information to drivers’ cellphones, and its role in building autonomous vehicles, positions the company to be a dominant force in insurance, some have reasoned.

W.R. Berkley Corp. CEO William R. Berkley said at a management seminar in late January that in certain respects, Google has the capacity to change auto insurance. Berkley said Google’s competitive advantage can’t be denied “because they invested this enormous sum of money in actively building a rule-road map of America.”

Amy O’Connor contributed to this report