While some are more exposed than others, U.S. property/casualty insurers generally can handle more significant deterioration in global equity market conditions while maintaining capital positions consistent with current ratings, according to analysts at Fitch Ratings.

U.S. P/C insurance companies traditionally allocate a percentage of invested assets to common stocks, which may boost long-run returns but are also a source of capital volatility. Fitch says recent equity market declines and continuing volatility have raised questions regarding insurers’ capital strength, given their exposures to equity investments.

In 2008, a 38 percent decline in the S&P 500 led to an average 20 percent decline in surplus for the above five companies, versus an industry aggregate decline of 12 percent, according to the analysis. The declines in 2008 reflected underwriting losses as well as negative investment returns.

Fitch said that in a stress test applying a 35 percent after-tax haircut on the equity holdings for a group of large U.S. insurers, Markel, Berkshire Hathaway and FM Global could face a 20 percent decline (or more) in policyholders’ surplus. Several other companies could show a decline in surplus of 15-to-20 percent in this scenario. A large percentage of companies would experience a more manageable loss of less than 10 percent of surplus. 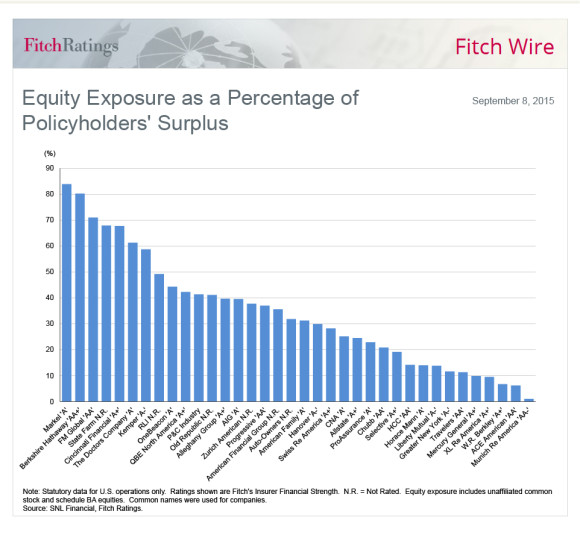 Hedge fund reinsurers Greenlight Capital Re Ltd. (GLRE) and Third Point Reinsurance Ltd. (TPRE) rank among publicly traded insurers with the largest exposure to equity investments relative to shareholders’ equity. Fitch said that estimating the effect of broader stock market declines on these entities is difficult due to the use of more intricate trading strategies that include long/short equity positions and greater use of derivative instruments. Both GLRE and TPRE reported a loss on their investment portfolio of more than 5 percent for the month of August 2015, Fitch said.