Collectively, the 14 U.S. surplus lines stamping offices have reported moderate growth in surplus line premiums during the first half of 2015.

Approximately 60 percent of all surplus lines insurance is processed by stamping offices, according to the Surplus Lines Stamping Office of Texas (SLSOT), which bi-annually aggregates premium and filing statistics from the 14 U.S. stamping offices.

Collectively, the stamping offices processed in excess of $13 billion in surplus lines premium in the first six months of this year, reflecting 9.5 percent growth over the nearly $12 billion in premium processed during the first half of 2014. Furthermore, 2015 filings with these stamping offices totaled more than 1.8 million, reflecting an increase of 5.3 percent over the 1.7 million filings recorded in the first half of 2014. 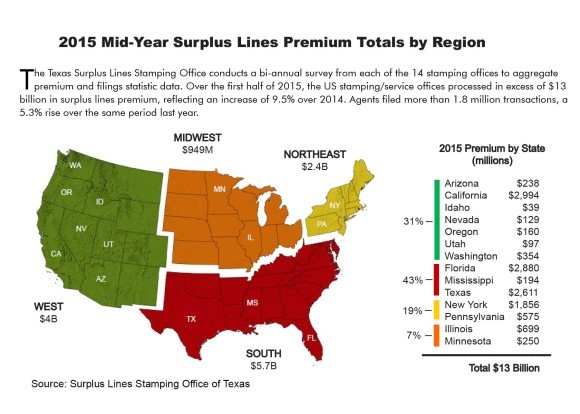 From a regional perspective, stamping offices in the South recorded the highest premium at $5.7 billion while the western states followed closely with premium levels at $4 billion, as evidenced with the regional depiction.

Within those regions, the stamping offices in the four largest surplus lines markets — Texas, California, Florida, and New York — showed varying levels of growth in the first half of 2015. California showed the strongest growth and the highest premium volume at $2.9 billion. Florida and Texas followed closely behind in premium reported, with $2.8 and $2.6 billion, respectively.By comparison, premium growth in each of these states was lower, with Florida just under 7 percent and Texas just over 2.5 percent growth. While New York has seen 14 percent growth, the premium reported was $1.8 billion.

Smaller volume offices displayed a wide range of change from significant growth to small decreases in premium. Oregon, with $159 million premium reported, showed the largest percentage gain of all states at 22.7 percent. On the other end of the spectrum, Idaho posted a loss in premium of 2 percent; however, a better perspective will be reviewed by the end of the year.

The aggregate data supports a continued modest growth from 2013 to present with some outliers by region. This may be due to varying legislative changes that account for specific growth as evidenced in the west and east coast regions.