One thing that’s often missed in President Donald Trump’s complaints about the U.S. trade deficit is America’s $248 billion surplus in exports of services like education, financial services and software.

Microsoft Corp., Goldman Sachs Group and FedEx Corp. are all exporters when they do business overseas. The money that more than 70 million foreign visitors spend in the U.S. each year also counts toward services exports. So do the tuition fees of over 1 million foreign students at U.S. colleges and schools, and the box-office returns for Hollywood blockbusters, when they’re screened abroad in India, China and elsewhere.

While the services surplus is dwarfed by the goods deficit, it has doubled over the past decade and is an area where the U.S. could potentially keep making gains, given its highly skilled and educated workforce.

Trump has pledged to return manufacturing jobs to the U.S. by ditching what he sees as unfair trade deals, and by urging American companies to make more products at home.

One risk is that an “America First” policy on goods could undercut the growing appetite of other nations for U.S. services. Countries like China, Japan and Mexico, which are under the spotlight for their massive surpluses in goods sales to the U.S., also have a large services deficit with the world’s biggest economy. 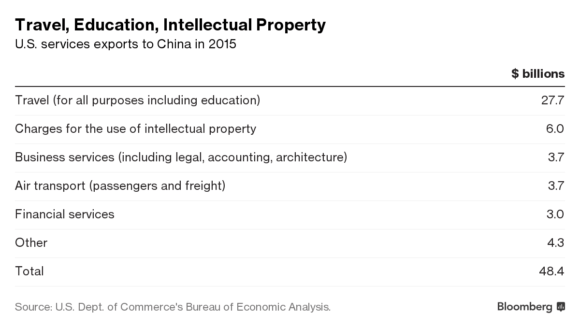 “There should be much greater emphasis on the fact that the U.S. has a huge and growing surplus for services,” said Mark Perry, a scholar at the American Enterprise Institute and an economics professor at University of Michigan. “If our trade deficit for goods is somehow related to unfair trade practices, then how does Trump explain America’s large and growing surpluses for services?”

“If China were to open up its service sector to the U.S., the U.S. surplus could balloon,” said Alicia Garcia Herrero, chief Asia-Pacific economist at Natixis SA. “This is what I would ask for if I were Trump, rather than engage in protectionist measures.”

The situation is the same for trade with South Korea, Japan, Switzerland, and Taiwan — a deficit in goods and a surplus in services. Indeed, of the nations on the Treasury’s currency watch list, only Germany has a surplus with the U.S. in both areas.

This position reflects the global supply chain, where multinational companies channel manufacturing production to places like Asia to take advantage of things like lower wages, according to Louis Kuijs, head of Asia economics at Oxford Economics.

Trump’s efforts to bring back manufacturing may not be easy, as the supply chains have become sophisticated and created labor forces with specific skills that may not be easy to replicate, according to Kuijs.

Natixis’ Garcia Herrero said the Trans-Pacific Partnership, which Trump has rejected, would have benefited American services exports, and areas of key strength for the U.S. like Silicon Valley.

Their arguments hold little sway with the U.S. administration, and this doesn’t look likely to change any time soon.

Steve Bannon, chief strategist for the Trump administration, said at recent conference that the withdrawal from the TPP was “one of the most pivotal moments in modern American history.” The government is working on new bilateral trading relationships that position the U.S. as a “fair trading nation” and start to bring jobs home, he said.