Employers expect that their average cost per-employee for health benefits will rise by 4.3 percent in 2018, which is above the average increase of 3 percent of the past five years.

Early responses from Mercer’s National Survey of Employer-Sponsored Health Plans, 2017 also show that employers are struggling to control cost for pharmaceuticals, which will rise more than 7 percent next year as spending on new specialty medications skyrockets.

Following the failure of efforts by Republicans in Congress to repeal and replace the Affordable Care Act, the excise tax on high-cost plans will go into effect in 2020 – and with the tax threshold rising at only about half the current rate of health benefit cost, many employers will be affected, according to Mercer.

Employers participating in Mercer’s survey predicting that health benefit cost per employee will rise by 4.3 percent on average in 2018 after they make planned changes such as raising deductibles or switching carriers. Over the past five years, Mercer’s surveys have found that the average annual increase has been about 3 percent; an increase of 4.3 percent would be the highest since 2011, when cost rose 6.1 percent. 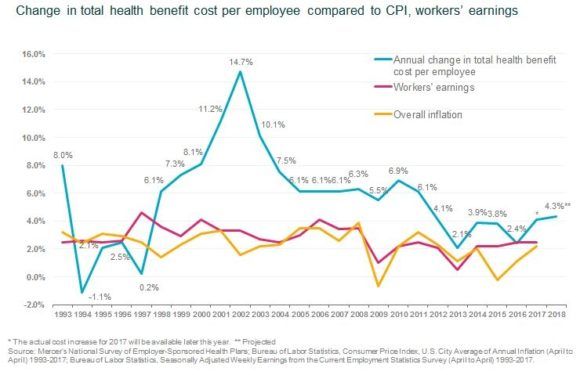 The projected underlying cost growth from 2017 to 2018 is 6.0 percent. That is the increase employers would expect if they made no changes to their medical plans; however, the survey found that 46 percent of employers will take steps to reduce cost growth in 2018. Offering lower-cost, high-deductible health plans has been an important strategy for holding down cost over the past decade, and the need to minimize exposure to the ACA’s excise tax on high-cost plans has accelerated this trend.

“Employers find the challenge of juggling cost-management objectives and affordability issues for employees gets harder every year,” said Tracy Watts, senior partner and Mercer’s leader for health reform. “Consumerism has a role in addressing rising costs, but there are many factors that drive costs, separate and distinct from relative generosity of the plan design.”

Employers must contend with cost increases that occur with medical advances – like the introduction of new medications used to treat complex conditions like cancer, multiple sclerosis, and hepatitis C. Respondents to Mercer’s survey reported that spending on these specialty drugs rose by about 15 percent at their last renewal, pushing up growth in the overall cost of prescription drugs to more than 7 percent.

“With so many new specialty drugs in the pipeline and few well-known brand-name drugs going off-patent in the near future, the spiraling drug cost problem will certainly get worse before it gets better,” said Watts.

But with the ACA’s excise tax still on the books and slated to go into effect in 2020, employers may have to pick up the pace of change to try to stay ahead of cost increases. Mercer estimates that 31 percent of large employers (500 or more employees) would be liable to pay the excise tax in 2020 – and with the tax threshold indexed to inflation and rising at about half the rate of health benefit cost, more employers would pass the threshold each year.

“The excise tax creates pressure to generate immediate cost savings though cost-shifting or other short-term fixes. But employers are also making good progress with longer-term strategies that address the root causes of high cost and cost growth,” said Beth Umland, Mercer’s director of research for health and benefits.

Strategies that employers are adopting to manage medical costs without raising employee out-of-pocket spending include providing care coordination and support for high-cost claimants. Employers are also addressing quality by using incentives to direct employees to Centers of Excellence and other high-performance provider networks. And they are shifting away from traditional fee-for-service provider reimbursement toward new payment models that reflect the value of the services provided rather than just the quantity.

“There are ‘real world’ examples of how these strategies can work,” said Watts, citing Mercer’s own Health Advantage, which coordinates care and support service for employees with very serious health issues.

The results reported are preliminary findings from Mercer’s National Survey of Employer-Sponsored Health Plans 2017. These preliminary results are based on approximately 1,500 employers who responded by August 15; these results are not weighted and represent only the early responders. Ultimately, approximately 2,400 employers will participate in the survey and the final results will be weighted to be nationally projectable, according to Mercer.