As summer begins, and as the July 4th holiday approaches, the Consumer Federation of America is issuing an alert to off-highway vehicle riders to operate their vehicles with caution.

According to data gathered by CFA from 2013 through 2018, July is the month with the most OHV fatalities and May and August follow as the second and third months with the most deaths.

The day with the highest number of fatalities is July 4th, which is also the day of the year with the most fatalities of children aged 16 or younger.

From 2013 through 2018, CFA and its OHV Safety Coalition documented more than 450 deaths during the month of July. For the entire time period, CFA has documented over 3,400 deaths. 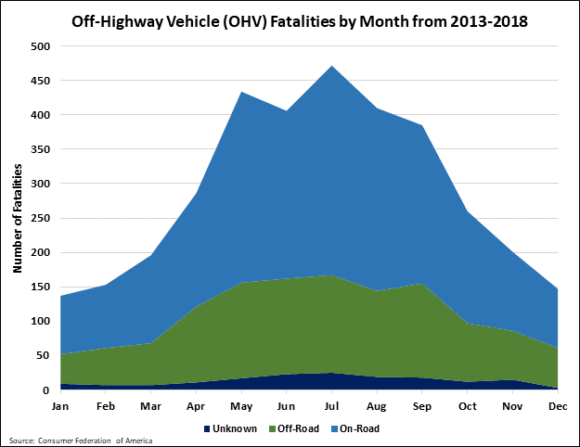 “July 4th is the day with the most OHV deaths. We urge all OHV riders to prioritize safety so that this statistic will not be a reality again in 2019,” stated Rachel Weintraub, legislative director and general counsel for CFA. “Operators of OHVs must have the necessary skills to operate an OHV, should use appropriate safety equipment, such as helmets, should never operate on roads, and never carry passengers.”

“All OHVs, even youth models, pose risks. OHVs are fast, complex machines, and due to their design, they roll over easily. One wrong choice could lead to the emergency department or worse. Children younger than 16 years just aren’t ready for the demands of safe riding, so we encourage parents to find a different activity for their child,” said Dr. Gary Smith, president, Child Injury Prevention Alliance.