U.S. workplaces have gotten a lot safer over the course of the past century. In 1913, the Bureau of Labor Statistics estimated that there were 23,000 “industrial deaths,” or 61 for every 100,000 workers. In 2018, the number of what are now called “occupational fatalities” was 5,250, according to a BLS survey much more exhaustive than its 1913 precursor, or 3.5 for every 100,000 full-time equivalent workers.

But those 5,250 deaths were an increase over 2017’s 5,147, and workplace fatalities have been up for six of the last nine years (the chart starts in 1992 because that’s when the BLS started its more-complete Census of Fatal Occupational Injuries). 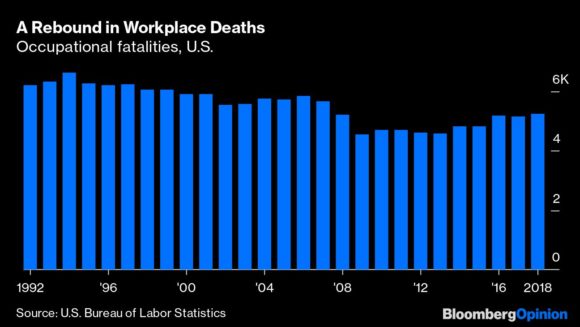 Recessions tend to reduce the number of workplace injuries and deaths because there are fewer workers to get hurt and because high-risk industries such as construction and trucking are often hit hardest by job losses. Some increase in fatalities was thus to be expected as the economy recovered in recent years, and the current number and rate of fatalities remain below the levels that prevailed before the last recession. (The BLS changed how it calculated the rates in 2006, which is why this chart only goes back that far.) 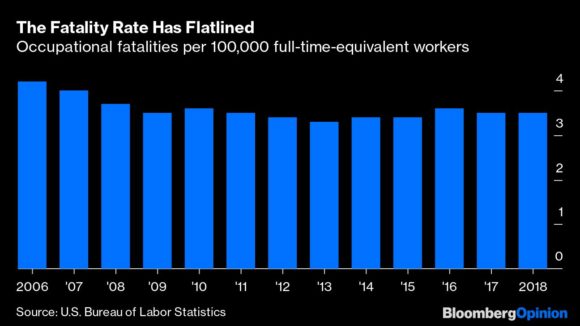 There was, however, something unusual going on in 2006 — a housing bubble that pushed the fatality-prone construction sector to its highest share of non-farm employment since 1956 — that makes the drop afterward less impressive and the subsequent failure of the fatality rate to keep falling the bigger story. It is also possible to identify a major force that has been keeping the rate from falling. This force is not necessarily evil, but as a 56-year-old I do find it kind of creepy: More people older than 55 are working, and people over 55 are more likely to die on the job than younger workers.

First, the statistics on 55-plussers in the workplace: 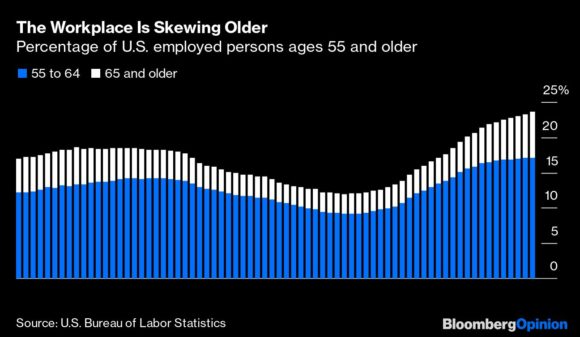 This rise of the older worker is partly just demographics — the giant baby boom generation, as defined by the Census Bureau, ranges in age from 55 to 74. But it’s also because older Americans, especially much-older Americans, are far more likely to be part of the labor force now than they were in the 1970s through 1990s. Among those 65 and older, the labor force participation rate has risen from a low of 10.4% in 1985 to 20.3% now. Among those 75 and older it has gone from 4% to 9.7% percent.

Older Americans are likelier to be working now for a variety of reasons. Some seem entirely positive — despite the recent stall in life expectancy, Americans are living significantly longer than they did a few decades ago, and once-common mandatory-retirement rules have largely disappeared since Congress banned most of them in 1986. A more complicated issue is the changing nature of retirement income: Some Americans work into their 70s because they have no retirement savings, while others have savings but work longer because the defined-contribution plans that now predominate reward delayed retirement in ways that most traditional pensions do not. 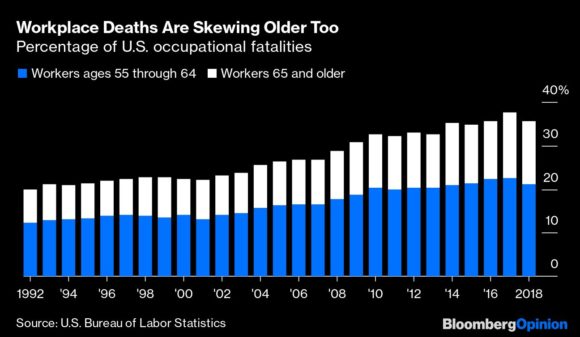 It’s not that the workplace has been getting more dangerous over time for older workers. Every age group has seen declines in workplace fatality rates since 2006, and the decline for those 65 and older has been the biggest. But 65-plussers’ share of the workforce has grown by three percentage points just since 2006, and their occupational fatality rate remains much, much higher than anybody else’s: 10.3 in 2018 versus 3.5 for the workforce overall and 4.6 for those ages 55 through 64. 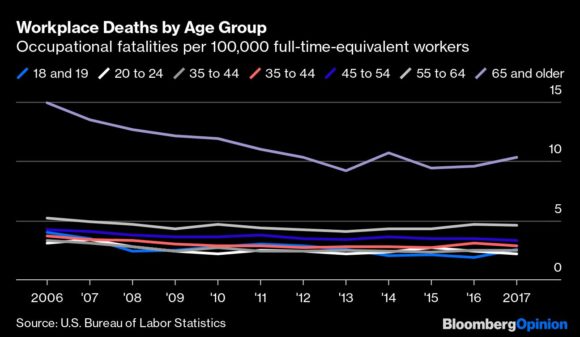 Being older obviously does make one more prone to keel over, but the occupational fatality statistics don’t include on-the-job deaths due to natural causes. So what explains the higher death rates of older workers? In an analysis published last month that was the inspiration for this column, BLS economists Sean M. Smith and Stephen M. Pegula sliced and diced the numbers in several ways in an attempt to answer that question. (To get statistically meaningful results, they generally focused on the entire 55-plus age group, not the smaller but much-higher-risk group of workers 65 and older, and combined data for a number of years.)

One thing that they found was that those 55 and older were more likely than younger workers to die of lingering injuries days, weeks, months or even years after a workplace incident. Older people are more fragile than younger ones, so they have more trouble recovering from workplace injuries than their younger peers, and are more likely to suffer certain injuries (hip fractures, for example).

When it comes kinds of accidents, the biggest cause of workplace fatalities for both older and younger workers is roadway incidents involving motorized land vehicles, aka traffic accidents, which Smith and Pegula found were responsible for about a quarter of deaths from 2011 through 2017 among those under 55 and among those 55 and older — so no disparity there. Fatalities among those 55 and older were significantly less likely to be caused by electrocution, homicide and suicide than among younger workers, while deaths from being struck by an object or equipment, falling to a lower level and being hit by a vehicle as a pedestrian made up a moderately larger share of workplace deaths for older workers than younger ones. The cause of death for which the age difference was the biggest was nonroadway noncollision incidents, which accounted for 6% of workplace deaths for those 55 and older and 3% for those 54 and younger.

What could these nonroadway noncollision incidents possibly involve? Think tractors. Agriculture, forestry, fishing and hunting had the second-highest fatality rate in 2018 of any industry whose fatality rate was estimated by the BLS, after truck transportation (23 deaths per 100,000 full-time equivalent workers versus 28). Smith and Pegula found that, from 2003 through 2017, farmers, ranchers and other agricultural managers suffered 14% of the occupational fatalities among those 55 and older, versus a bit more than 2% among those 54 and younger.

For a variety of reasons, farmers have been finding it harder and harder to retire — or easier and easier not to retire, as modern farm equipment allows them to do more on their own. Farmers and ranchers have the highest median age among occupations for which the BLS calculates that figure, at 56.1 years, and a remarkable 30.8% of them are 65 and older. Most of the fatal nonroadway noncollision incidents mentioned above involved jack-knifed or overturned vehicles, so basically, a not-insignificant number of elderly farmers are dying when their tractors or pickup trucks tip over. But hey, they’re out in the fields, amid the amber waves of grain. There are worse ways to go.

Which brings us to the bigger question of whether anything should be done about this rise in older-worker fatalities. Smith and Pegula conclude their study with the hope that it will help safety and health experts “tailor their efforts to best meet the needs of older workers and to keep them safe during their careers,” which sounds like a good plan but not exactly a game-changer. Technological advances have played a big role in reducing workplace risks in the past, and one can easily see how self-driving technology could make truck driving, farming and other occupations much safer — albeit at the same time destroying lots of jobs. In the meantime, the most powerful policy lever seems to be retirement-system design.

In countries where old-style pensions still prevail, 65-plussers are much less likely to have jobs than in the U.S.

Data from the International Labor Organization also indicate that the U.S. has a much higher occupational fatality rate than most other affluent countries, but national standards for reporting and calculating these rates seem to vary so much that I suspect the numbers aren’t really comparable. So no chart of that! But it does seem clear that if we paid people to leave their jobs at 65, there would be fewer occupational fatalities in this country.

This would also, of course, be very expensive, and the funding shortfalls that loom in some of those countries with old-style pensions dwarf what is in store for Social Security (which is basically an old-style pension, too, but is relatively small and doesn’t require that you retire to receive it). What’s more, there’s a growing body of evidence indicating that working past 65 actually prolongs people’s lives. That is, you may be more likely to die on the job, but you’re less likely to die, period. Which seems like an OK trade-off.