The 17-page document prepared by the Centers for Disease Control and Prevention (CDC) was put off to avoid giving “overly prescriptive” guidance, said the official, a member of President Donald Trump’s White House task force, confirming a news report by the Associated Press that the guidance was shelved.

The CDC did not immediately respond to a Reuters request for comment. More than 74,000 Americans have died from COVID-19, the respiratory disease caused by the virus, out of 1.2 million-plus known to be infected, according to a Reuters tally.

Many states have begun easing restrictions on social and business life, including Florida, Georgia and Texas, but have yet to meet White House recommendations to hold off until the number of new COVID-19 cases has declined for two weeks.

The administration official said the CDC document was only discussed by task force members after news of its existence leaked last month, prompting them to seek revisions to add greater nuance to the guidance. 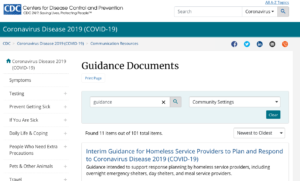 “Issuing overly specific instructions — that CDC leadership never cleared — for how various types of businesses open up would be overly prescriptive and broad for the various circumstances states are experiencing throughout the country,” the official told Reuters.

Trump has largely allowed states’ governors to determine their own response to the outbreak but has encouraged them to start reopening, deeply concerned by the economic devastation from the national shutdown.

Another reminder of the damage came on Thursday, when the Labor Department reported that 3.2 million Americans claimed unemployment benefits for the first time last week, bringing the total to about 33.5 million since March 21, roughly 22.1% of the working-age population.

Public health experts have warned against reopening too soon, saying it could fan hot spots of infection and a second spike in deaths.

On Tuesday, Trump said he had decided to wind down the task force as the country moves into a second phase focused on the outbreak’s aftermath. But the next day, he said he had changed his mind and would keep the task force intact.

Trump, who is seeking a second term in a November election, has staked his re-election bid on the strength of a U.S. economy that cratered with the onset of the virus as Americans stayed at home.

While officials in dozens of U.S. states have relaxed at least some restrictions, others in harder-hit states have urged caution. On Wednesday, New York Governor Andrew Cuomo voiced concern, citing a rise in cases in parts of the country.

“You have states that are opening where you are still on the incline,” he told a daily briefing on Wednesday. “I think that’s a mistake.”

Photo: President Donald Trump speaks during the signing of a coronavirus aid package to direct funds to small businesses, hospitals, and testing, in the Oval Office of the White House, Friday, April 24, 2020, in Washington. (AP Photo/Evan Vucci)