AM Best said its estimates of $100 billion in asbestos losses and $46 billion in environmental losses for the U.S. property/casualty industry remain unchanged as of year-end 2019.

In a report, AM Best notes that A&E loss reserves have declined the past ten-plus years, with loss payments still outpacing incurred losses. Over the past five years, the industry has paid out $16.1 billion for A&E claims. Over the same period, insurers have incurred $11.3 billion in losses, according to the report.

In the report, “AM Best’s A&E Loss Estimates Remain Unchanged,” the ratings agency says the P/C industry has funded approximately 91% of its aggregate A&E exposures, which translates into an unfunded liability of approximately $9 billion for asbestos and $4 billion for environmental. These are “relatively small amounts” when compared to cumulative losses of more than $91 billion (asbestos) and $42 billion (environmental), according to the ratings firm, which adds that “determining ultimate funding estimates is extremely difficult, given that the ultimate exposures cannot be known.”

Asbestos losses have started to show signs of subsiding slightly, with incurred losses down approximately 13% in 2019. In the 2015-2019 period, the industry has incurred approximately $7.9 billion in asbestos losses, while paying out nearly $12.8 billion, and slightly more than $3.4 billion in environmental losses, while paying nearly $3.3 billion.

The report notes that at current payout levels, A&E reserves will run off within seven years or so barring any additional reserve strengthening. 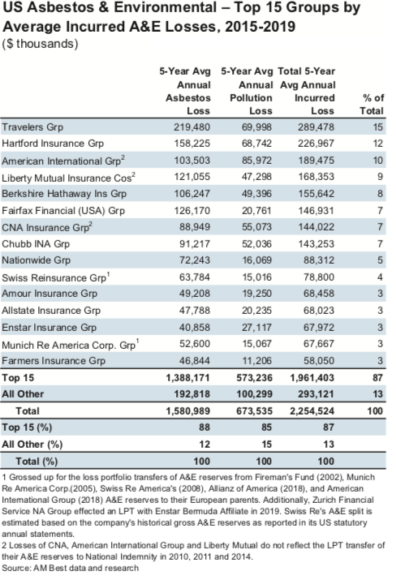 The top 15 insurers account for 87% of the industry’s average annual A&E incurred losses, with Travelers Group at the top of the list, followed by Hartford Insurance Group and American International Group.

AM Best said it recognizes that “fully funding ultimate estimates is extremely difficult, given the improvement in therapies, emerging drug combinations and early diagnosis, combined with ongoing litigation,” but it views the majority of insurers with material A&E exposures as “well-capitalized and able to absorb any shortfalls.”