Just one or two days in the office is the ideal setup for hybrid work, according to a new study, as it provides workers with the flexibility they crave without the isolation of going fully remote.

The findings, in a paper from Harvard Business School, were based on an experiment in the summer of 2020 where 130 administrative workers were randomly assigned to one of three groups over nine weeks. Some spent less than 25% of their work days in the office, some were in more than 40% of the time, while a third “intermediate” cohort landed in the middle, translating to a day or two per week. That subset turned out more original work than the other groups, and “this difference was significant,” the authors wrote.

“Intermediate hybrid work is plausibly the sweet spot, where workers enjoy flexibility and yet are not as isolated compared to peers who are predominantly working from home,” said the paper, co-authored by Harvard associate professor Prithwiraj Choudhury. “Intermediate hybrid might offer the best of both worlds.”

The study, a rarity in that it examines actual hybrid worker outcomes rather than just their preferences, comes as companies like Apple Inc., Bank of America Corp. and Alphabet Inc.’s Google are nudging workers back into the office without a clear sense of the ideal balance between remote and in-person schedules.

Research co-authored by Stanford University professor Nick Bloom has found that employers expect nearly a quarter of working days to be spent at home going forward, but a “sizable gap” exists between what employers and employees desire when it comes to the days required to be in the office.

That discrepancy was made clear by a survey released Tuesday of 200 senior executives, who said that primarily re mote workers are disadvantaged and have fewer opportunities compared with those who work mostly in the office. The survey, commissioned by Vyopta Inc., which helps companies manage their workplace collaboration and communication systems, also found that leaders simply don’t trust most staffers’ ability to work remotely. Still, nearly half of the executives surveyed said they failed to give workers the tools to be as engaged as their in-person counterparts. 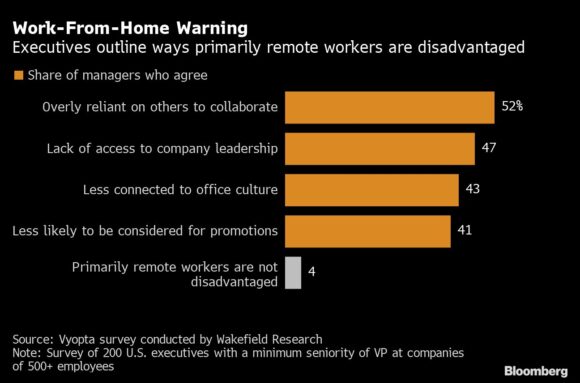 Choudhury’s research will likely frustrate bosses — not to mention civic leaders like New York City Mayor Eric Adams — who have prodded workers to get back to their desks most of the time, arguing that collaboration and corporate culture suffer when people work from home. The Harvard paper analyzed more than 30,000 emails sent by the administrative workers, using textual analysis to gauge the novelty of their output. It found that the hybrid group performed better, and got better ratings from managers, than those who were primarily at home or mainly in the office.

In addition, the researchers analyzed polling data from the start of the pandemic to conclude that those who come into the office just a few days a week don’t feel they’re missing out on things like mentorship, as fully-remote workers sometimes do.

“Work from home arrangements allow workers to capture the benefits of a productive and enjoyable workplace almost as much as those workers who are always in the office,” the paper said. “Our results consistently suggest that intermediate levels of WFH may result in both enhanced novelty of work products and greater work-related communication.”

The key with hybrid arrangements, though, is organizing things so that teams are in the office together on the same days, preventing the problem of workers commuting in only to spend half their day on Zoom calls with remote colleagues.

“You want people to try and come in together, so office time is together time,” Bloom said by email. “Well-organized hybrid does seem to be the sweet spot.”