Twenty people per day were hit and killed by drivers in the U.S. last year, according to an analysis by the Governors Highway Safety Association (GHSA). 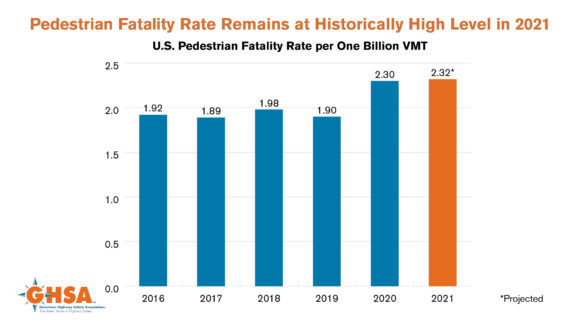 Nationwide, there were 2.32 pedestrian deaths per billion vehicle miles traveled (VMT) in 2021, which is similar to 2020 but well above the pre-pandemic average of 1.9.

The report from the GHSA, Pedestrian Traffic Fatalities by State: 2021 Preliminary Data, follows another recent preliminary analysis from the National Highway Traffic Safety Administration (NHTSA) that said U.S. traffic deaths jumped 10.5% in 2021 to 42,915. The total is the highest since 2005, and the yearly increase is the largest since the NHTSA started its tracking system in 1975.

Like in auto fatalities, speed played a major role in pedestrian deaths. The GHSA said the percentage of speeding-related pedestrian crashes involving children ages 15 and younger more than doubled over the last three years. Impaired and distracted driving, and other dangerous driving behaviors also proliferated.

“This is heartbreaking and unacceptable. The pandemic has caused so much death and damage, it’s frustrating to see even more lives needlessly taken due to dangerous driving,” said GHSA Executive Director Jonathan Adkins, in a statement. “We must address the root causes of the pedestrian safety crisis – speeding and other dangerous driving behaviors, inadequate infrastructure, and roads designed for vehicle speed instead of safety – to reverse this trend and ensure people can walk safely.”