A federal court judge has denied a motion brought forward by some medical providers who claimed that Florida’s new no-fault auto law unfairly prevented them from making a living, on the basis it is unlikely they will prevail in court.

Florida lawmakers earlier this year enacted the law that made numerous changes in benefits including $10,000 for emergency injuries and a cap of $2,500 for non-emergency medical services. The law also eliminated massage therapists and acupuncturists as medical providers who could be paid under a PIP policy.

Under a case filed in U.S. District Court [Myers, et al v. McCarty Case No. 8:12] several chiropractors claimed the restriction on non-emergency benefits infringed on their ability to make a living. It was a claim echoed by the massage therapists and acupuncturists. 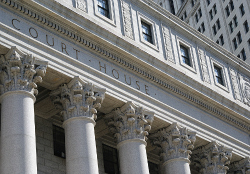 Federal Judge Richard Lazzara, however, denied their motion to block the law saying they failed to show how they would be irreparably harmed under the new law or how their request for an injunction would serve the public.

“The plaintiffs have not met their burden of establishing the essential element necessary for the issuance of a preliminary injunction — a substantial likelihood they will prevail on the merits,” wrote Lazzara.

Christian Camara, Florida director for R Street Institute, said the ruling represented a victory for consumers who stand to benefit from the lower insurance rates under the new law.

“While this is just a short-term procedural victory and the case will proceed to trial, Justice Lazzara has handed down a defeat to the opponents of reform,” said Camara. “This also marks a win for Florida consumers, who stand to benefit from containing the escalating costs in our auto insurance market.”

Lazzara quoted an earlier case [Panama City Medical Diagnostics Ltd. v. Williams 13 F.3d at 1547] where a district court initially blocked a law preventing the state from imposing fee caps on diagnostic imaging services with an exception for hospitals and group practices where the caps didn’t apply.

“The proper inquiry is concerned with the existence of a conceivable rational basis, whether or not that basis was actually considered by the legislative body,” opined the court.

Lazzara said the same line of argument applied to the claim that the PIP law altered the economic prospects of the medical providers and could unfairly penalize accident victims. As long as there is a rational basis for the law, those changes in the PIP law stand.