Although the 2019 hurricane season did not have a significant impact on Florida, loss creep from prior storms continues to weigh on reinsurers, leading to a likely rise in rates for the upcoming June renewal period. As noted in AM Best’s The Florida Market: Bracing for the Next Big Event (June 28, 2019), the reinsurance market for Florida property underwriters saw an initial round of hardening during the June 2019 renewal season.

The reported loss creep has in part been influenced by social inflation in the Florida market, resulting in adverse development of prior year loss reserves stemming from an increase in loss frequency and severity. Despite the lack of hurricanes making landfall last fall, companies—particularly the smaller, Florida-dominant property writers with questionable balance sheet strength—remain more susceptible to prevailing market conditions, such as hardening reinsurance pricing and adverse claims trends. Based on market surveillance, reinsurance rates are likely to increase by 15%-20% for the June renewal period; companies that depend highly on reinsurance may be most impacted (Exhibit 1).

Because of inherent hurricane risk, Florida property writers spend a considerable amount on reinsurance, given the need for prudent catastrophe reinsurance programs. As we stated in our June 2019 report, a number of challenging issues in Florida have made it necessary for carriers to remain nimble in strategy and proactively manage several forms of risk, with rising reinsurance costs potentially being the next event on the horizon. Rising reinsurance costs have the potential to pressure some of the more thinly capitalized Florida-specific companies in the market.

Reinsurance dependence, as measured by unaffiliated ceded written premium to policyholder’s surplus, exceeds 100% for all but four of the 25 companies listed, indicating elevated sensitivity to the changing reinsurance environment.

Companies with high reinsurance dependence face difficult choices. Higher reinsurance rates may pressure earnings if insurers decide to continue writing business at existing levels. Those opting to retain more business may see declines in capitalization in the event of catastrophic storms; these companies may be forced to write less business to maintain existing capital.

The Florida Hurricane Catastrophe Fund (FHCF) remains an important part of companies’ reinsurance structures, with several having room to increase participation should terms prove more favorable than the private market. Insurers may also benefit from Florida’s assignment of benefits (AOB) bill, which took effect on July 1, 2019. The bill clarifies rights afforded various parties, provides more flexibility (allowing for rescission of assignments without penalty), and requires more comprehensive disclosures. It addresses several issues that could materially improve operating performance and loss reserve development as they relate to AOB and could lead to lower costs over time, but the near term benefi ts may be minimal. Some in the market are also concerned that the new bill does not address non-AOB water-litigated claims, which could somewhat limit its benefit. 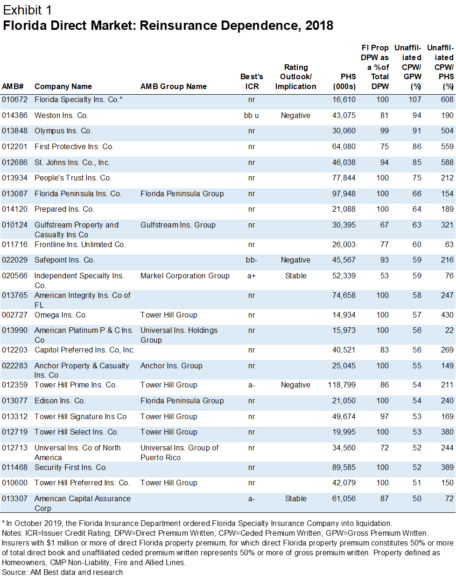 Claims processing in the Florida insurance market may also benefit from a number of new technologies. Policyholders can now report claims through their mobile devices, sending video and pictures of damage to speed up cycle times. Mobile devices have also strengthened insurers’ loss mitigation efforts, with pre-event notifications as well as post-event communications, to help guide affected insureds through the claims process.

In addition, aerial imagery has helped companies identify properties that may have been impacted by severe events through pre- and post-event image comparison. Homeowners pricing in Florida has been challenging owing to AOB and tropical cyclone concerns, as well as underwriting challenges. From mid-2016 through early 2018, more rate increases were approved than denied, after which more rate increases were denied than approved.

Through August 2019, however, the approval of rate increases has been growing. Higher rates may offset the rise in reinsurance costs slightly. Rising rates reflect insurers’ catching up to prior-year storm development and continued tropical storm exposure. The substantial pressure of the loss creep from prior storms, AOB issues, and the specter of rising reinsurance costs have led to a notable deterioration in the financial results of a number of Florida property writers.

The considerable stress on companies in the Florida property market is likely to continue, particularly for companies that have not effectively managed the complexities of this challenging market. Accordingly, there is a good chance that continued weakened balance sheet strength will spur additional consolidation and, in some cases, require additional capital support to sustain operations. AM Best will continue to monitor the Florida property market and the impact it has on rated entities.