One of the last U.S. ski resorts to prohibit snowboarding said a lawsuit challenging the ban degrades the U.S. Constitution and should be thrown out.

Lawyers for the Alta ski area east of Salt Lake City, Utah said in their recent court filing that “it demeans the Constitution to suggest that the amendment that protected the interests of former slaves during Reconstruction and James Meredith and the Little Rock Nine must be expanded to protect the interests of those who engage in a particularized winter sport.”

Jon Schofield, an attorney for the snowboarders, defended his team’s legal argument, saying the Constitution is meant to protect all people from “arbitrary and irrational conduct by the government and those acting in concert with it.” He said they will respond fully in an upcoming court brief. 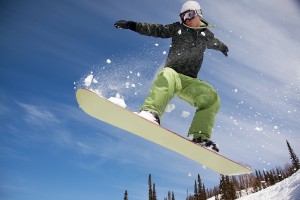 The lawsuit was filed in federal court in January by four snowboarders claiming discrimination on national forest lands that make up most of the Alta ski area. The legal action has reignited a long-festering culture clash on the slopes between skiers and snowboarders.

Attorneys for the snowboarders argued that the ban violates the promise of equal treatment under the 14th Amendment.

Lawyers for Alta countered that there “is no authority holding that the zone of interest created by the Fourteenth Amendment protects those who stand sideways on snowboards.”

Alta also reminded the court that it is a privately owned business with the right to make decisions it determines are best for the corporation. Its lawyers say the resort’s permit with the Forest Service allows Alta to restrict any type of skiing device that creates an unnecessary risk to other skiers.

The snowboarders, however, contend in the suit that Alta dislikes them for their allegedly reckless activity on the slopes, inconsiderate attitude, baggy clothes and overuse of such words as “gnarly” and “radical” when describing difficult terrain.

Alta attorneys acknowledged in their latest brief that they promote a snowboarder-free experience to lure skiers. They say skiers find the slopes at Alta more peaceful, safe and enjoyable because they don’t have to worry about being hit by snowboarders whose sideways stance leaves them with a blind spot that can make their wide, sweeping turns a danger to others on the slopes.

Skiers, in contrast, don’t have any blind spots because the face forward as they speed down the slopes.

The two other resorts that ban snowboarding are Deer Valley, also in Utah, and Mad River Glen in Vermont.

The plaintiffs in the lawsuit – Rick Alden, Drew Hicken, Bjorn Leines and Richard Vargas – bought tickets to Alta in January knowing they would be turned away at the chairlifts and could then sue the resort. One of them later sneaked onto the lift using “split boards” – a snowboard that splits apart and resembles skis – but was intercepted and escorted down the mountain.

The lawsuit concedes that snowboarders were “perhaps rightfully” stereotyped as riffraff decades ago by more sophisticated and affluent skiers, but times have changed.