Ten miles from the Hawaii town of Pahoa that is being menaced by a stream of lava from Kilauea volcano, there’s another community that was almost entirely swallowed by the molten rock nearly 30 years ago.

“It’s like nothing else. It’s the newest land on Earth,” said Hank Powers, a 47-year-old tour guide who is building a house on 24 acres of Kalapana lava fields.

Their example may be of little comfort to nearly 1,000 residents of Pahoa on the Big Island, who are watching as lava threatens to set fire to homes and split their small, rural town in half. As of late Thursday, the lava was 480 feet from Pahoa Village Road, which runs through downtown.

But Kalapana’s residents show how some adaptability can make living with lava possible, albeit in some extreme conditions.

Powers said he moved in after getting accustomed to lava while taking people to view it as a tour guide. He’s lived in Montana, Colorado and elsewhere in Hawaii, but he declares Kalapana’s windy black plains his favorite. 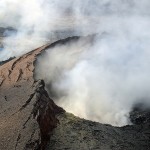 The 47-year-old said he would be excited if lava returned. He’s also prepared: He built his house so it could be loaded on a truck and moved away from a fresh flow if necessary.

That allows him to skip insurance. People in high-risk lava zones can buy insurance, but they usually have to pay a higher premium. The homes are covered by a fire policy due to the threat of the lava’s heat.

That’s a fraction of what a home costs in Leilani Estates, a subdivision closer to Pahoa, where the average price is $207,000.

Ed Elarth, a 51-year-old who makes stone carvings and shell necklaces, said the new land has an energy that has made him feel healthier and younger since he moved in three years ago.

Life is rustic. People rely on solar and wind to power their homes, capture rain in tanks to wash with and truck in drinking water. Most people use composting toilets.

“A lot of people come out here and they can’t handle it. It just drives them nuts,” Elarth said. “Pele’s got a way of weeding out the ones that don’t belong here,” he said, referring to the Hawaiian volcano goddess.

Elrath said people in the outpost are like family, which he has not felt while living in other parts of the Big Island.

Robert Keliihoomalu, who has lived in Kalapana for all his 75 years, said lava reminds people to be humble, kind, understanding and open because it can’t be controlled.

“It brings everybody close,” said Keliihoomalu, whose home has been spared from past flows.

All of Hawaii’s islands were formed by lava that emerged from a hotspot in the Pacific Ocean where magma has been poking through the Earth’s crust for millions of years.

Powers said he could move his house to another spot on his 24 acres in Kalapana if another flow came. Or to a different lot he owns nearby. But he vows he would return after the new flow built more land.

“I’d just bring it back later. It would just be a little higher up,” he said.