Nevada Gov. Brian Sandoval has signed a bill aimed at curbing frivolous lawsuits over construction defects after the measure passed through the Republican-controlled Legislature along party lines.

The Republican governor said AB125, which was sponsored by Republican Assemblyman Ira Hansen, incorporated ideas that had been discussed for more than a decade.

“During my State of the State address, I challenged the Legislature with passing meaningful construction defect reform,” Sandoval said in a statement after the signing on Tuesday. “They have met that challenge with the Homeowner Protections Act, which discourages frivolous litigation and strengthens Nevada’s rebounding housing market.” 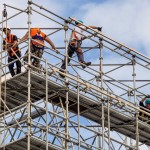 The measure would more narrowly define construction defects so they wouldn’t include issues that crop up as a result of remodeling or later construction. It would require homeowners to exhaust other options, such as using the builder’s warranty and seeking resolution through the Nevada State Contractors Board, before pursuing a lawsuit.

The bill would also require parties to pay their own legal fees. Existing law allows attorneys’ fees to be awarded as damages.

Republicans said the bill would fix a law that was originally meant to protect homeowners when flaws surfaced in their houses but has opened the floodgates for expensive litigation and created a financial incentive for attorneys to file suit in the wake of Nevada’s building boom last decade. Construction companies testified that the litigious environment raised their insurance rates and discouraged them from taking on projects.

Democratic opponents said they worried the bill helps contractors while making it harder for homeowners to get recourse when they encounter a problem with their house.

Democrats accused Republicans of jamming the bill through the legislative process and questioned the political motivations of the bill and state Senate leaders.

“How upside down can the priorities of Michael Roberson and legislative Republicans be that in what was supposed to be the ‘education session,’ the first major bill they send to the governor to sign isn’t about improving education or helping Nevada schools, but rather a bill lining the pockets of their special interests campaign donors?” said Zach Hudson, spokesman for the Nevada Democratic Party.