Oregonians could begin flying along certain highways at 75 mph after lawmakers heard testimony Friday on a bill upping speed limits from 65 mph on interstate highways.

Under the proposal, passenger cars would be able to go 10 mph faster than the current limit. It also ups the speed limit on state highways to 65 mph. Certain vehicles, such as trucks and school busses, would have to stick to the 55-mph limit on interstate and state highways.

Republican state Rep. Cliff Bentz of Ontario sponsored the bill. Safety improvements to vehicles, such as air bags, GPS systems and seatbelts, mean the current speed limits are no longer as necessary to keep drivers safe, he said. He also noted motorists used to be able to drive along at 75 mph before the speed limits were dropped to help save gas in the early 1970s. 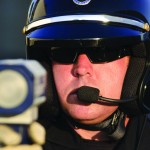 “The problem is that at one time we did drive at 75 mph way before the cars were as safe as they are now and the state survived,” Bentz said. He also noted boosting the speed limit could help bring the state closer together by allowing people living in rural areas to travel faster.

Troy Costales, an administrator at the state Department of Transportation, cautioned lawmakers at the public hearing that increasing the speed limit might lead to more crashes and fatalities.

“While we can change the laws of man, we can’t change the laws of nature. When speed goes up for every 10 miles an hour it doubles the energy released when something happens. So a small mistake becomes a big mistake at the higher speeds,” Costales said.