A Utah judge this week tossed out part of a lawsuit filed by a family who says they were beaten by drunken revelers at a ski resort’s Oktoberfest celebration because the event has turned into a booze-fueled Rocky Mountain spring break.

Snowbird ski resort officials who have also been under scrutiny by the state liquor board say they have never been cited for breaking alcohol rules at the German-themed festival, and the 2014 incident was the only one of its kind in more than 40 years.

“We feel like the safety record at Oktoberfest speaks for itself,” said Dave Fields, vice president of resort operations at Snowbird.

The family initially sued for unlimited damages, arguing that Snowbird let the men get too drunk and didn’t do enough to protect the family from the attack that happened after they took a tram to a relatively isolated stop on the mountain.

Judge Heather Brereton ruled that the family can only sue under a Utah law that makes bars liable for up to $1 million a person and $2 million per incident if patrons get too drunk and hurt someone. 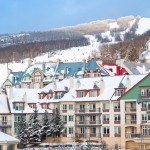 She dismissed claims that the resort didn’t have enough security to protect people.

Lawyers for the plaintiffs – Brent Anderson, his wife, Laura, and their stepson Thadius Grzeskiewicz – say the lawsuit will still move forward.

They say they were on the tram when a group of drunken men got on board and started singing explicit versions of a Mormon children’s song. When Anderson asked the men to quiet down, they attacked the family, punching Anderson several times and threatening Grzeskiewicz along with his wife and baby, according to the lawsuit.

Three of the men were arrested and later pleaded guilty to misdemeanor charges including assault and riot.

The family’s lawyers say the attack was a symptom of a larger problem at the event that has gotten out of hand and become a kind of Rocky Mountain spring break.

Lead attorney Jim McConkie said an undercover agent they hired has seen people passed out and drivers weaving down a canyon road on the way home.

“It’s not that we’re trying to stop people from having a good time. But if they’re going to serve liquor up a canyon, that’s the worst place do it,” McConkie said in an interview.

The Utah Department of Alcoholic Beverage Control considered denying Snowbird a permit in 2014 for the event, but authorities changed their minds after a backlash against the move that critics said would torpedo a popular event and put the state’s staunchly sober image in an unflattering light.

This year, Utah lawmakers passed legislation aimed at avoiding a repeat of the situation by requiring the liquor board to sign off on an event such as Oktoberfest if it meets the permit requirements. The measure is awaiting approval from Gov. Gary Herbert.

The resort’s Oktoberfest runs from August through October and attracts about 60,000 people.