There were more workplace fatalities in California in 2015 compared with the prior year, but worker deaths are below the average rate of fatalities prior to the recession, according to a California Department of Industrial Relations issued today.

The report shows that 388 Californians died on the job in 2015, the latest numbers available. 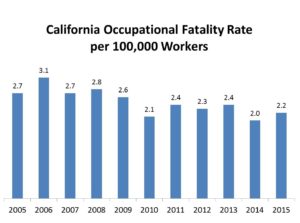 A DIR review of the past 10 years indicates that workplace fatalities remain below the average rate of fatalities prior to 2008, when the last recession began.

DIR Director Christine Baker said the department has an eye on workplace violence.

“In January, Cal/OSHA will convene an advisory committee to address workplace violence,” she said in a statement.

Other DIR findings include: