A Utah lawmaker wants to send people to jail for harassing farm animals with drones, all-terrain vehicles and even dogs under a proposal that is unique in the U.S. but has gained an unlikely opponent.

Republican Rep. Scott Chew, who is also a rancher, said Tuesday that he introduced the bill last month because farmers incur significant costs and hardships when livestock are injured.

The measure is the first of its kind in the country, said Lora Dunn, an attorney for the Animal Legal Defense Fund, a national animal rights organization.

The Humane Society of the United States said the plan was redundant and may discourage members of the public from getting close enough to livestock to expose farmers’ mistreatment of their animals. Utah already has a law against injuring or killing farm animals.

“The biggest concern for us is that it eliminates any kind of possibility of documenting the problems that are taking place on that property,” said Sundays Hunt, the organization’s director in Utah. 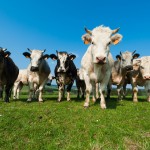 Chew’s proposal calls for up to a year in jail and a $2,500 fine for someone who purposefully drives an ATV through a herd of cattle or chases chickens with a drone and seriously injures or kills the animals. He said he has not heard of drones hurting farm animals but wants to ensure farmers are covered in case they do.

Anna Marie Vail of the Utah Department of Agriculture and Food said the proposal is needed. She said young people often chase farm animals for fun, and if livestock get stressed, they can simply roll over and die.

“They don’t understand the seriousness of what they’re doing and how much that cow or calf means to the farmer,” she said.

Animal harassment also can have an economic impact, Chew said. If a cow is chased, it may lose weight, making it less valuable. Chew said his animals have been harassed.

About two years ago, his sheep were drinking water from a trough when a group of ATVs drove through them, scattering the herd, the lawmaker said. Although none of the animals were hurt, he said many lambs could have become orphans.

“The worst thing that can happen is you get mamas separated from their babies, and that’s one of my biggest concerns,” Chew said.