A California bill that could affect auto repair costs is making its way through state Legislature, and one group that’s happy about that is the Association of California Insurance Companies.

ACIC is one of several groups backing Assembly Bill 1679, which would govern the so-called “steering” of automobile repair businesses by insurers by providing an alternative to the California Department of Insurance auto body labor rate survey safe harbor regulation.

Earlier this year the CDI adopted rules that included asking insurers conducting a labor rate survey to use only information from the body shops surveyed.

The CDI has noted that the rules are voluntary and were created in the interest of consumer protection.

However, ACIC has a beef with the regulations.

Armand Feliciano, ACIC vice president, offered an example to explain why the group has a problem with the CDI asking insurers to use only information from the labor rate survey as a factor:

A hypothetical insurer knows that a body shop the carrier has done business with charges $60 an hour for a certain type of repair. Under the CDI regulations, if that body shop decides to state on the survey they are charging $80, the regulations prevent the insurer from using the past knowledge of the $60 per hour rate as a factor in determining auto repair costs. 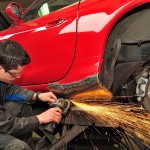 “If my companies followed exactly the way the department wants it under the regulations, our concern is that’s going to drive up costs for policyholders,” Feliciano said.

The ACIC said it conducted a recent study using anticipated increases in labor rates due to the CDI regulations that showed that between $280 and $300 million dollars could be added to systemwide costs.

The CDI asserts that it conducted a financial analysis that showed up to 9 cents per year, per vehicle could be added to costs.

The CDI in lieu of commenting for this article refereed to an opposition letter written last month by CDI Deputy Commissioner Robert Herrell.

In the letter Herrell writes that “AB 1679 represents a full-frontal assault by insurance companies on the rights of consumers to receive accurate information” before deciding where their vehicle will be repaired, and that the bill would enable insurers to steer consumers to their own preferred insurer-endorsed operation.

“AB 1679 completely guts brand new regulations that were developed after an exhaustive process over six years and dozens of meetings with all interested stakeholders,” the letter states. “The bill also wipes out decade-old important consumer protections authored by consumer champions such as then-State Senator Jackie Speier that are contained in the California Auto Body Consumer Bill of Rights.”

AB 1679, authored by Assemblywoman Autumn Burke, D-Inglewood, is still making its way through the Assembly. It’s been heard in several committees, including the Assembly Committee on Insurance, and has been referred to the Appropriations Committee.

Its supporters include ACIC, the American Insurance Association, the California Chamber of Commerce and the National Association of Mutual Insurance Companies.

According to an analysis from the Assembly Insurance Committee, the bill’s intent is to “supersede in its entirety the DOI’s steering regulations,” among other changes it would make.

The CDI’s regulations took effect at the end of February, and there are indications that some auto body shops have taken notice, according to the ACIC.

The group said that one of its California insurer members received invoices from a body shop that had traditionally charged $71 per hour for a certain repair, but by March the same shop was charging $116 an hour for those repairs.

According to the ACIC, auto repair costs are already on the rise as cars get more sophisticated and costly, and the number of accidents are up 6.9 percent in California.

Another part of the new CDI regulations addressed “geo coding” by requiring that when insurers conduct the labor rate survey they must use six body shops plus body shops a mile out to fairly compare rates.

According to Feliciano, this could impact rates in densely populated areas like Los Angeles, where there might be 20 shops in a mile in some places.

He believes that with so many shops near each other, it would be easy for shop owners to start talking to one another about the prices they quoted on the survey, and then for those prices to start reflecting those conversations.

“In a place like L.A., there so many more body shops, it’s easier to compare their labor rate survey and get them talking and prices can start going up,” Feliciano said.

While he may have been referring to what’s known as collusion, which is an illegal practice, he avoided going so far as to say that.

“The words I would use are ‘inappropriate price comparison,'” Feliciano said.

AB 1679 instead sets the boundaries for the comparison of six auto body shops in a contiguous geographic area, such as a city or a county.

In his letter, Herrell outlines what the CDI feels are several “problematic provisions” in AB 1679:

Manufacturers Balk at ‘Right to Repair’ Initiative by Biden Administration