The passenger rail cars on an Amtrak train that derailed near Seattle, Wash. last December, killing three people, were allowed by federal regulators to stay in service even though they didn’t meet current crash-protection standards, federal investigators said Tuesday.

The Talgo Inc. cars had to be specially modified to make them sturdier in a collision, but they still didn’t meet crash standards adopted in 1999 by the U.S. Federal Railroad Administration, according to newly released documents from the National Transportation Safety Board.

The NTSB is conducting a two-day hearing on safety at Amtrak following a spate of deadly crashes involving the nation’s only passenger railroad. As part of the hearing, it released preliminary reports on the Dec. 18 accident in DuPont, Washington.

Connections between six of the rail cars failed, which had been a concern of FRA because the cars can then collide with each other, said NTSB investigator Michael Hiller. In addition, five of the massive wheel assemblies on the rail cars came loose and one caused damage to the car where the three people died, Hiller said.

“Now that we have evidence of how the Talgo trainset performs in a crash, does the FRA have any concerns that would cause you to re-examine your decision to grandfather this equipment?” Hiller asked a witness from FRA. 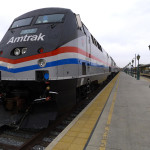 Gary Fairbanks, staff director of FRA’s Motive Power & Equipment Division, responded that he believed the cars met the main part of the safety requirement, which is designed to prevent them from compressing in a collision and trapping people inside.

The FRA granted Amtrak approval to use the rail cars in 2009, concluding that they were safe in collisions at moderate speeds of 50 miles an hour or lower. But the agency “expressed concern” about their performance at higher speeds, the NTSB said.

The Amtrak train was traveling at 78 mph when it hit a curve on a bridge over a highway where the speed was supposed to be no higher than 30 mph and it jumped off the tracks.

The three people who died had been traveling in one of the rail cars that was severely disfigured by the crash impact, NTSB said. Two of them were thrown from the car. A total of 74 people were injured, including 57 passengers on the train.

The car’s floor buckled, its roof collapsed and most of the seats were crushed, the NTSB said.

The preliminary reports don’t include any conclusions about what caused the accident or whether the use of the rail cars contributed to the number of deaths and injuries. However, the Talgo cars are a focus area of the investigation into the accident’s “survival factors,” according to the documents.

Amtrak has permission to use the Talgo rail cars in the Pacific Northwest, Southern California and on a route from Los Angeles to Las Vegas, according to NTSB. Final approval was granted for a total of five trainsets, or 67 Talgo cars.

The NTSB hearing is also looking at a Feb. 4 accident in Cayce, South Carolina, that killed two Amtrak employees when the train was inadvertently directed onto an adjoining track and struck a parked CSX Corp. freight train.